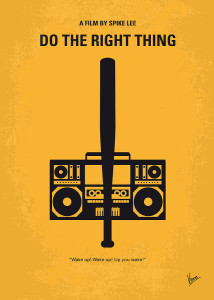 Courtesy of Shadow Electric at the Abbotsford Convent, Film Blerg is giving away 2 double passes to this Sunday (15th February) to Spike Lee’s classic DO THE RIGHT THING.

It’s the hottest day of the year on a Brooklyn block when violence erupts between African-American residents and an Italian-American family. The story transpires over 24 hours, between the time the local heroes wake up, and the morning after the wild fighting, murder, riots and police brutality.