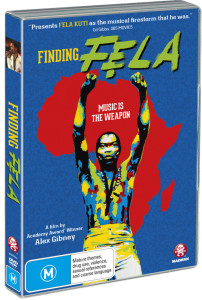 Film Synopsis: Directed by Academy Award-winning filmmaker Alex Gibney (TAXI TO THE DARKSIDE, THE ARMSTRONG LIE), FINDING FELA is a vibrant, politically-charged journey in to the life of the beloved, celebrated father of Afrobeat, Fela Kuti.

Fela Anikulapo Kuti used the self-created musical movement of Afrobeat to express his revolutionary political opinions staging an ideological uprising against the dictatorial Nigerian government of the 1970s and 1980s. His influence helped bring a change towards democracy in Nigeria and promoted Pan Africanist politics to the world. The power and potency of Fela’s message remains to this day and is expressed in the political movements of oppressed people, embracing Fela’s music and message in their struggle for freedom.

Written By
Film Blerg
More from Film Blerg
One of the most surprising hit genres on our TV screens in...
Read More