Director Clint Eastwood shows no signs of slowing down his prolific output. His latest film American Sniper focusses on Chris Kyle, a Navy SEAL and America’s most lethal sniper, and Jason Hall’s screenplay is based on Kyle’s autobiography. Eastwood has crafted an engaging portrayal of a man who experiences conflicting loyalties between country and family, and there are several sequences of quiet, taut suspense and confronting brutality throughout. It is anchored by Bradley Cooper’s compelling, layered performance, complete with weight gain and a convincing Texan accent, but overall the film could have been more nuanced in its depiction of other characters and in its dialogue.

Kyle (Cooper) was raised in Texas, and early on we see the influence of his religious father in teaching him how to hunt game. As an adult he works as a cowboy at a rodeo, but after the bombings of American embassies in 1998 decides to join the Navy SEALs. During his training he meets his eventual wife Taya (Sienna Miller), and after the 9/11 attacks he is deployed to Iraq, where over the course of four tours he is variously involved in the hunt to find an al-Qaeda leader, his right-hand man ‘the Butcher’, and a sniper of exceptional skill known as ‘Mustafa’. During his service he is continually lauded for his skill and precision, but as time goes on the psychological burden becomes increasingly apparent, and he is torn between a duty to protect his fellow SEALs and his lonely wife and young children back home. 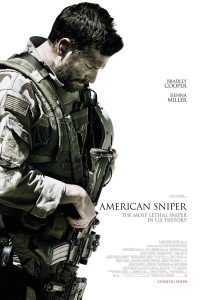 Cooper grounds the film by successfully capturing the inner turmoil that mounts with each subsequent tour. He imbues his performance with an effortless brawny physicality, but he is also attuned to revealing the impact that his success as a sniper has upon his emotional stability. This psychological burden is especially evident in scenes of silence through the film, whether he is peering with measured breath at his next potential kill, or sitting at home staring into nothingness and completely disengaged from reality. In these scenes, Eastwood stages weighty moments of disquiet and subtlety in which emotional and plot-driven tension converge seamlessly.

However, whilst Kyle is fleshed out into an intriguing character, the rest of the cast are given less with which to develop layered characters of their own. Instead, their dialogue seems to rely more on predictable characterizations rather than nuance or depth. This arguably applies even to Taya, of whom we learn little about throughout the film besides the increasing strain of Kyle’s absence on her. The supporting characters are positioned less as substantial characters in their own right and more as means to reflect and galvanize Kyle’s own inner turbulent conflict. As such, American Sniper, whilst featuring a gripping central performance and moments of anxious tension throughout, is not quite as complex or impactful as it sets out to be.

American Sniper is in Australian cinemas from 29 January through Roadshow Films.

Written By
Dan Santos
More from Dan Santos
Writer-director Ari Aster is already proving himself to be one of the...
Read More