Based loosely on the 1974 cult hit of the same name which stared James Caan, The Gambler stars Mark “Marky Mark” Wahlberg as John Bennett, a university professor and writer who teaches literature and seems to have stopped caring about or enjoying it a long time ago. He meanders through his dull academic life by day, but at night he visits shady gambling establishments and steadily burns through his family’s substantial wealth with high-stakes blackjack. He soon makes the logical and rationally sound decision to borrow money from a bunch of gangsters (lead by Michael Kenneth Williams) which he soon gambles away into oblivion. This combined with his already substantial debt to the members of the Korean mob attracts the attention of a ruthless loan shark (John Goodman) and soon John’s entire life starts unraveling. He sees no reason to go on until he finds a relationship with one of his students (Brie Larson) and suddenly, with a debt of a-quarter-of-a-million dollars and seven days to get it, has to find a way out of the most dangerous situation of his life.

This is the latest film by Rupert Wyatt, director of 2011’s well received Rise of the Planet of the Apes, and although there’s enough directorial flare here to make The Gambler sufficiently entertaining, with a dimmed color palate that seems to keep to differing shades of light blue and grey, a well paced plot and a few well-constructed set pieces, he’s been saddled with an overstuffed script that contained too many esoteric ideas and occasionally goes on strange tangents. The script was written by William Monahan who has an impressive record with the like of Kingdom of Heaven and The Departed (The Gambler was originally set for another Scorsese/DiCaprio team up) but the screenplay for this film has some noticeable problems with it, it can’t decide what message it wants to convey and more importantly can’t decide its position about the main character. John is cynical, rude and deep in the throes of a depression induced nihilism, and the script oscillates between showing him as a smart man who it seems got into this situation deliberately and at other times as a gambling addicted moron, who isn’t smart enough to quit. 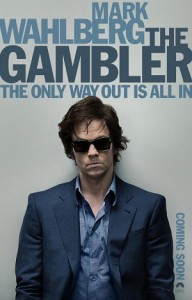 Mark Wahlberg performs through a haircut that looks tremendously like that worn by a young Mick Jagger and a facial expression that combines the best ingredients of a dead-pan stare and the look of someone who’s depressed, who seems uninterested that their life is rapidly falling apart and even less interested in their ability to stop it. We’ve seen what Wahlberg can do in the past, at this point he’s proven that he has the ability to make a decent leading man and he does well with what he’s given in the character of John, but he’s a character that the script keeps juggling from one thing to another. The script seems to make him do things that don’t have any logical reasoning behind them. He seems hell-bent on his own destruction. There are multiple times throughout the film where he has everything he needs to get himself out of trouble but through reasons that aren’t explained very well, choses to throw it all away to get in even more trouble. It’s a character that repeatedly hits rock-bottom then tries desperately to tunnel deeper. Perhaps this is a comment on behalf of the screenwriter showing what it’s like to be afflicted with a gambling addiction, but if it is, it sure isn’t properly explained or narratively cohesive. There’s also scenes of him doing mundane things that seems to be repeated at least three times, he seems to spend a lot of time in the bath then gets up and eats a bowl of cereal. Seriously, he eats a lot of cereal in this film.


Wahlberg is only character that the script seems to care about, with everyone else being pushed to the sidelines. John Goodman strangely gets multiple scenes of him half naked in a changing room and a single monologue which he elevates to being one of the best scenes of the film, but then nothing else. The true waste is Brie Larson who gets to do even less with a deeply unexplored and uninteresting character. We’ve seen the truly amazing things Brie Larson can do (Short Term 12 and United States of Tara) but she keeps getting throw-away parts in big films, if or when she gets the proper role, she has the potential to be one of the best young actresses currently in the system.

In the end, there isn’t a whole lot to recommend here, overall it’s a bit dull and despite obvious efforts on the part of the director, becomes just another contemporary crime thriller. The performances are all good, but the characters they’re stuck playing are all rather uninteresting and the main character is both strangely dull and keeps making stupid decisions with next-to-no reasoning behind them. When you go to the cinema you’re usually taking a gamble and it’s best to know the odds – In this instance it’s best to be the opposite of The Gambler’s main character: Don’t take the risk.

The Gambler is in Australian cinemas from February 5 via Paramount Pictures.

Written By
Simon Storey
More from Simon Storey
There’s a quote that gets thrown around by both comedians and pessimists...
Read More