A Danish western is something you don’t see everyday, and this is perhaps the only unique aspect of The Salvation, directed by Kristian Levring.

The Salvation belongs to the revenge movie genre, most recently used in Django Unchained and True Grit. It’s a tried and tested formula where the bad guys are irredeemably evil and the good guys reluctantly justified in their behaviours, pushed to defend themselves, usually against overwhelming odds. Women are incidental to the storyline, the trigger for the violence, ultimately powerless and in the cases of both female leads, voiceless too. Marie (Nanna Øland Fabricius) doesn’t speak English while Madelaine (Eva Green) has no tongue; it was cut out by “savages”, who we can assume were American natives.

The introductory trail sets the scene; Jon (Mads Mikkelsen of Hannibal) is a veteran of the Danish war against “Ze Germans”, and has been building a life in America for his family, wife Marie and son (Toke Lars Bjarke) who he hasn’t seen in seven years. The family arrive in the opening moments of the movie from Denmark and they strike up a stilted conversation with a Spanish couple (Sivan Raphaely and Jose Domingos) who are unfortunately replaced by Paul (Michael Raymond James), and Lester (Sean Cameron Michael). The journey does not go well, and it’s not long before the feathers of these Western ruffians are ruffled, guns drawn and Jon’s wife and son taken hostage for predictably nefarious purposes. These two men’s lives end soon afterwards thanks to Jon’s sharp-shooting. He makes no mistakes with Paul, filling him with enough lead to start a pencil factory.

Moving on however, we see Paul is the brother of the big bad, Delarue (Jeffrey Dean Morgan) who arrives in town with a posse of ruffians to monster the townsfolk. He’s in the pay of oil barons who want the land for the petroleum beneath, and they want the landowners out. To prove how evil he is, he raises the protection tax, shoots two men and an old lady, and, honestly, if there was a puppy nearby he’d have executed that too. He even wears a black hat, just in case we’re in any doubt he’s the bad guy.

We’re now in High Noon territory, the a town filled with scared people unwilling to stand up for themselves. But instead of a courageous Gary Cooper standing against the bad guys, we have Sherriff Mallick (Douglas Henshall). He’s only too happy to sell out Jon and his brother Peter (Mikael Persbrandt) to buy time until reinforcements arrive. But he does have a kind word for Delarue who was apparently once a nice guy, so that’s all right. 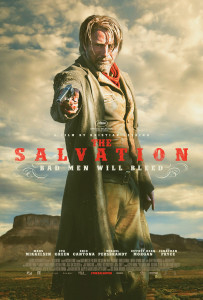 If The Salvation had come out in the 70s or 80s it might be regarded as veering on original, perhaps even a classic of western cinema. As it is, it’s thirty years too late. And it’s a real shame, as there was clearly time and effort put into the movie. The Salvation has excellent production values (thanks to the team including Director of Photography, Jens Schlosser and production designer Jørgen Munk), direction, and acting. But it’s the story by Anders Thomas Jensen and director Kristian Levring which ultimately fails to tell anything new, and is surprisingly predictable into the bargain. It’s obvious Paul will have a badder bigger brother, that the townsfolk won’t help Jon; Madelaine won’t escape with the cash from the safe and Peter will escape by taunting an idiot deputy. Even in the final battle there was a chance to do something differently, but again, the movie falls into a predictable heap of tropes.

Maybe that was the point of course, to ape as many westerns as possible to create some kind of homage, a tribute to the genre? But as director Nicholas Meyer said of the latest Star Trek outing, an homage adds something new to the genre, it doesn’t just retread the same thing.

Ultimately, if you want to see this movie done well, watch Rango instead. That at least made use of the tropes in an entertaining, interesting way. Or you could do worse than to go back to the originals, with High Noon for the good man against overwhelming odds, The Magnificent Seven for cleverly staged gun battles, or even, dare I say, The Three Amigos for the homage-value.

Salvation is screening in ACMI Cinemas from 14 January – 1 February 2015.