Thankfully, this time no one gets abducted, apparently due to Liam Neeson’s request that the film go in a different direction. This being the only slight diversion from the previous two films, with much of Taken 3 consisting of familiar or predictable villains, an unemotional family subplot and action sequences made harder to follow due to poor camera work. Aspects that were pitted against Mills in Taken 1 and 2, making his struggle slightly more difficult; foreign environment, unknown enemies and specific clues which allowed Mills to show off his ‘particular set of skills’ in finding those responsible are no longer original, or unique. However, Instead of replacing these elements with even more difficult obstacles, the stakes are unfortunately lowered and made quite dull.

Ex-CIA agent Brain Mills (Liam Neeson) is still trying to enjoy retirement and maintain a relationship with his ex-wife Lenore (Famke Janssen) and daughter Kim (Maggie Grace). Mills’ peaceful retirement is again cut short after being framed for the murder of Lenore, for which he goes on the run to evade the pursuit of the CIA and detective Franck Dotzler (Forrest Whitaker). For one last time, Mills must track down those responsible, exact justice and protect his daughter.

The series writers, Luc Besson and Robert Mark, were reportedly approached by Fox to do the third instalment despite Besson, Kamen and Neeson all saying that they had no intention of continuing the films. Besson and Mark have clumsily attempted to offer some variety into this instalment by seemingly ignoring the series stronger merits. 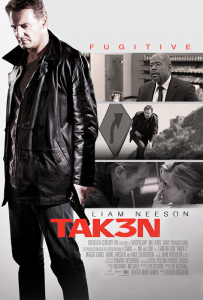 This time Mills spares Los Angeles the same excessive mayhem he ensured in Paris and Istanbul. Much of the action usually used to maintain a fast pace, is used sparingly to make way for the dramatic elements of the plot. By staggering the pace this accentuates the films lack of subtlety, enjoyment and logic of the narrative.

The appeal of Liam Neeson as Mills, easily the films biggest asset, wears off pretty quickly due to his underutilisation as the veteran hero doing all he can to protect his family. Mills is more like Harrison Ford in The Fugitive, but with a less desperate appeal than Dr. Kimble. Other performances from Whitaker, Dougray Scott (playing Lenore’s Husband) and Grace are straightforward, with almost all characters being relatively insignificant.

Directed by Olivier Megaton, also the director of Taken 2. Not much of Taken 3 makes sense, and regardless of what type of film this is, it should still make sense. For example, Mills is ex-CIA, so one would assume he wouldn’t be comfortable with his ex-wife’s new husband, Stuart (Scott), being an arms dealer.

Elaborate escapes and action scenes don’t need to be plausible, but need to be believable. The film goes out of it’s way to explain some of Mills’ miracle escapes, but chooses not to explain how he avoids death, or capture when backing a car down an eight-story car park elevator, causing an explosion. Somewhere in between the five seconds of the car hitting the ground and the explosion Mills has managed to flee the scene.

Taken was a film that knew what it was and who it aimed to please. Taken 3 didn’t have to follow the same formula to end this series, but working within the confines of its premise would have helped a little more. The third time around the fight has gone out of Mills and out of the franchise that perhaps reached it’s potential two films ago.

Taken 3 is in Australian cinemas from 8th January through 20th Century Fox.