Strange things happen in the woods. At any given moment in Rob Marshall‘s adaptation of Stephen Sondheim and James Lapine‘s musical Into the Woods, this idea is constantly apparent. Murky figures lurk around corners and others skip into the light as we’re introduced to the films’ characters. Ubiquitous fairytale characters are interwoven into the film, each with their own enclosed story that eventually merges into one larger event, a trait we’ve seen more recently and specifically on the Disney-owned ABC program Once Upon a Time. Every line these characters utter breed a level of recognizable familiarity surmising the stories we’ve come to know and love. Look beneath the surface though and you’ll find something amiss.

Beneath the surface of the fairytale rehashing are feelings and emotions of universal significance all relating to desire and what happens when you get what you’re after. Rhythmical timing is at the core of this message with Marshall visually and musically hitting every precise note of Sondheim’s multi-layered score with gusto. Each character has their own experience and reason to head into the woods, and the 15-minute opening wonderfully displays this with curiosity, wonder, hope and fear. Nefarious shadows cast by the big bad wolf (Johnny Depp) undermine the cutesy “child-on-journey” scenes we’ve been treated to with the adventures of Little Red Riding Hood (Lilla Crawford) and Jack (Daniel Huttlestone). Nothing is really what is seems, and as the story continues within it’s two-act structure, the audience is made aware of this even more. Acid-tongued and driven by bitterness (amongst other things), the witch steers the plot into typical adventure/quest territory, spawning a range of songs surrounding desire and a need for something to complete their lives: Rapunzel’s freedom (Mackenzie Mauzy); Cinderella’s hope for a better life (Anna Kendrick); a family for the Baker and his wife (James Corden and Emily Blunt); the witch’s vain obsession with appearance (Meryl Streep); the wolf’s hunger; Jack’s quest for adventure; and the Prince’s conquest (Chris Pine). Nowhere is there a content character without a desire.

If desire is the first strong component of the film’s themes, then caution comes second. The first act terrifically indicates each characters lustful pursuit towards their desires with strong determination: “If you know what you want, then you go and you find it and you get it. And you give and you take and you bid and you bargain, or you live to regret it.” 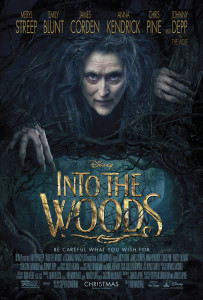 Ethics are questioned and reshaped to meet these desires: “If the thing you do is pure in intent, if it’s meant, and it’s just a little bent, does it matter?” But caution is given and acts as a precursor to the second act’s overarching “be careful what you wish for” sentiment. These lyrics of caution are evidence mostly clearly when the Witch sings to Rapunzel: “Don’t you know what’s out there in the world? Someone has to shield you from the world. Stay with me. Princes wait there in the world, it’s true. Princes, yes, but wolves and humans too.”


A veritable selection of newcomers and seasoned players are featured in lead and bit parts and complete a talented ensemble. Much attention will be placed on Blunt, Corden and Kendrick, though the true marvel of the film is Meryl Streep hands-down. Streep uses her voice with remarkable pitch-perfect Sondheim precision, exalting both terror and pain. Her witch defies stereotypes; she is not purely evil but acting in response to hardships fallen upon her. She is full of love towards somebody she is trying to protect. Streep is at her best during the poignant song Stay with Me, a song displaying tenderness, anger, passion, desperation and timidity.

Special mention also goes to the foreseeably under-mentioned Tracey Ullman and Christine Baranski as the Jack’s mother and Cinderella’s evil stepmother respectively. Each role in the film, no matter how small has a large pedigree of talent behind it.

Transitioning from one act to the other is a tough feat without the useful device of an interval, something the play has up on the film version. This transition does suffer from not being terribly smooth and the audience would be forgiven to think that the film had ended at the end of the first act. Sadly the charm, humour and pace of the first act are not entirely replicated into the second act, making a connection to the story (with arguably more interesting themes) a tad more difficult.

Aimed at a family audience, Into the Woods has something the whole family can easily enjoy. The film’s message has valid meaning and Marshall’s pace, for the most part, deftly matches the meticulousness, delicacy and artfulness of Sondheim and Lapine’s story and characters.

Into the Woods is in Australian cinemas from 8 January through Disney.

Written By
James Madden
More from James Madden
As my MIFF intentions project continues, I have finally gotten around to...
Read More