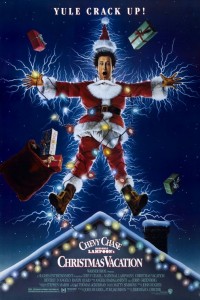 Chevy Chase returns as Clark Griswald in the third instalment of the National Lampoon’s Vacation series. The film begins with the Christmas Vacation theme song, sung by Mavis Staples with an adjoining animation that sets up what is in store for the next hour and a half. Based on the National Lampoon’s comedy magazine, the film adaptation follows along the same lines when a house full of kids, wife Ellen (Beverly d’Angelo) in-laws, parents and cousins stay for the yuletide season.

Ever the typical DIY dad, Clark not only cuts down an all too big “Griswald family Christmas tree” from what could be a national forest, but also decks out his exterior with 25,000 light bulbs. While missing a few screws, Clark is a man full of optimism and strong family morals. He is ambitious in both his career and with his family. His annual Christmas bonus propels him into wanting the perfect Christmas and then to surprise the family with the news of backyard pool. But in typical National Lampoon style, nothing goes according to plan.

As per usual in the selected Christmas films of the 12 Days of Christmas feature, a strong supporting cast exists. Juliette Lewis unexcitedly plays Audrey in that Juliette Lewis way, despite this being an early film role for her. An almost unrecognisable Johnny Galecki (aka Roseanne, and now The Big Bang Theory) plays Rusty as a basically nice kid. Randy Quaid returns as the hillbilly cousin Eddie alongside his wife Cathrine (Miriam Flynn). Doris Roberts is at her bitchy usual as Ellen’s mother, with an added boozy edge that makes her look more akin to Piper Laurie in Twin Peaks than her most famous character Marie Barone in Everybody Loves Raymond (which is a weird observation seeing as Angelo Badalamenti did the music for the film) E.G. Marshall is also antagonistic as Ellen’s father, citing a fairly understandable hatred of Clark. Diane Ladd and John Randolph are warm as the dutiful and supportive parents of Clark. Nicholas Guest and Julia Louis-Dreyfus also play the hedonist and suffering neighbours.

Many of the memorable scenes feature most of these supporting characters. One of the best examples sees the arrival of the grandparents whereupon the scene is cut quickly between all of the greatly talented and funny actors. Memorable quotes must also be mentioned with particular favourites belonging to Ellen’s reasoning to Audrey: “I don’t know what to say, except it’s Christmas and we’re all in misery.” Clark’s best quotable moment comes after hearing he did not receive the usual Christmas bonus:

“Hey! If any of you are looking for any last-minute gift ideas for me, I have one. I’d like Frank Shirley, my boss, right here tonight. I want him brought from his happy holiday slumber over there on Melody Lane with all the other rich people and I want him brought right here, with a big ribbon on his head, and I want to look him straight in the eye and I want to tell him what a cheap, lying, no-good, rotten, four-flushing, low-life, snake-licking, dirt-eating, inbred, overstuffed, ignorant, blood-sucking, dog-kissing, brainless, dickless, hopeless, heartless, fat-ass, bug-eyed, stiff-legged, spotty-lipped, worm-headed sack of monkey shit he is! Hallelujah! Holy shit! Where’s the Tylenol?”

Jeremiah S. Chechik’s direction is fun, if not slightly manic, with particular humour added with a hand held cameras when a S.W.A.T. team attack the Griswald house after Eddie kidnaps Clark’s boss. John Hughes’ script is once again perfect and is really damn funny.

Christmas Vacation is simultaneously wholesome and silly. Chase is at his comedic best with perfect timing and many slapstick moments. Simply put, Clark is a bumbling idiot and it is a joy to watch his ineptitude dominate across the John Hughes production. The film has become such a classic film that any house with too many Christmas lights is labelled as a Griswald house.

Christmas Vacation was theatrically released in Australia on November 30, 1989 through Warner Bros.