Peter Jackson‘s The Hobbit series has thrown almost everyone into mutually exclusive camps: the haters and the indifferent. For what is essentially a bit of fun, it’s remarkable how protective people can get when people mess with books — though granted JRR Tolkein is a pretty big deal. As a result, before having seen it, many people have probably already made their minds up about Jackson’s latest and last instalment. This seems a little unfair, given the considerable skill, talent and effort that is immediately noticeable – although not totally unjustified, given how liberal Jackson’s interpretation has become.

Previously on The Hobbit, against all advice, some dwarves and everyone’s favourite hobbit, Bilbo (an ever impressive Martin Freeman), broke into the Lonely Mountain, home to the old dwarven kingdom of Erebor. In the process of trying to recover their ruling gem, the Arkenstone, they pissed off Smaug the dragon (Benedict Cumberbatch), who is now about to wreak vengeance by toasting the human-inhabited Laketown. The only person standing in the way seems to be the noble Bard (Luke Evans).

Having reclaimed the Lonely Mountain, the dwarven would-be king, Thorin Oakenshield (Richard Armitage), is becoming increasingly obsessed with protecting his acquired legacy at the expense of all others. The elves and humans each want their share of the treasure, and don’t much care for the stubbornness of dwarves. Moreover, Sauron has revealed himself as the driving force behind this recent rise of evil, and is threatening to unleash hell on all parties concerned – his armies being headed by pug-faced Bolg, and Voldemort’s cousin from another dimension, Azog. 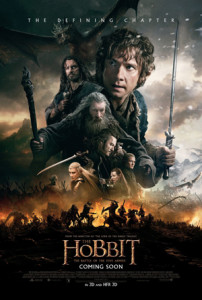 Strangely, as far as trilogies go, The Hobbit series’ strongest chapter will prove to be its middle one, The Desolation of Smaug. After the spiders, the barrels, Bilbo’s magnetic encounter with Smaug, and the giant golden dwarf, much of The Battle of the Five Armies does seem something of an afterthought, albeit not one without its thrills.

This film very rarely stops to take in a view. For 144 dazzling minutes, this is a frenetic string of hyper-realised battles, with a lot of over-helpful exposition to keep things moving. In the style of the series and the fairytale nature of the source material, the emphasis on death and doom is not quite as palpable as it was in Jackson’s The Lord of the Rings, and there is enough playfulness in the dialogue, casting and subplotting to offset the serious consequences at stake. Moreover, Jackson is a proven master of the sprawling, character-driven battle scene, and accordingly, he has crafted a thoroughly enjoyable ride.

However, there is a downside, and this may be partly due to the overly collaborative nature of the screenplay, written by Fran Walsh, Philippa Boyens, Guillermo del Toro and Jackson. It comes from a temptation to  overclutter the storytelling by falling back on previous success – such as including a raft of cameo appearances from key Lord of the Rings characters that amount to little more than novelty value. For instance, while there is fun to be had playing with Legolas’s (Orlando Bloom) many freakish abilities, his antics and wooden demeanour probably take up ten minutes where we could be progressing the story with more interesting characters like Bilbo and Gandalf (Sir Ian McKellen).

In all, it’s been a long but fun ride, and this reviewer is glad it got made. But the last word is probably best described by Bilbo himself – it’s just ‘sort of stretched, like butter scraped over too much bread’.

The Hobbit: The Battle of the Five Armies is in Australian cinemas from 26 December through Roadshow Films.