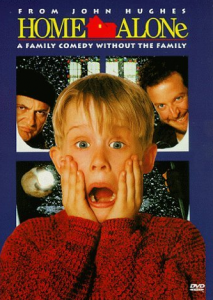 It goes without saying that John Hughes was behind some of the most popular films of their time. The first two (and frankly only two) Home Alone films are no exception to this rule. While chaos surrounds the McCallister household on the eve of their international flight to Paris, a storm brews both outside and inside the house. Kevin (Macaulay Culkin), one of the youngest children of Peter (John Heard) and Kate (Catherine O’Hara), is sent to the attic after literally causing a mess. During the night a storm disconnects the power and the family anxiously rush to the airport forgetting about Kevin and granting his wish to be without a family.

Left home alone, to his own devices, Kevin initially goes shopping, keeps up with the household chores and enjoys an endless array of junkfood and trashy television. Meeting his match against the fumbling and petty criminals Harry (Joe Pesci) and Marv (Daniel Stern), Kevin navigates his survival amongst the thieves who are robbing the neighbourhood one household at a time.

Macaulay Culkin had been plucked from obscurity when featured in Hughes’ Uncle Buck with John Candy. Within a year, Culkin have grown from supporting player to leading man at age ten. Culkin is feisty, funny and strikingly able and independent as Kevin and was rewarded with a Golden Globe nomination as Best Actor in a Motion Picture Comedy.

Acting as a character in itself, the McCallister’s booby trap ridden house is the embodiment of the classic American household. Permeated through countless images of banisters, attics and large spacious rooms, the house symbolises a house that is also familiar in the big budget Christmas film.

Along with Chris Columbus’ ample direction, Hughes’ screenplay is a winning formula with very tight dialogue. As part of Hughes’ modus operandi, a familiar disconnection between the protagonist and the family exists, following the format set out with Sixteen Candles, Ferris Bueller’s Day Off and The Breakfast Club. The supporting cast is played with perfection with maniacal yet memorable performances from Stern and Pesci. O’Hara is the quintessential caring mother who thankfully gets a lucky break from John Candy(who else!)

Among the numerous favoured moments, one of the best sees the first inclusion of the fictional Angels with Filthy Souls with unforgettable lines “Keep the change you filthy animal.” Some criticisms saw the film’s violence that was administered by a child as inappropriately and of negative consequences. Regardless of these criticisms, Home Alone is the perfect film. Whether viewed at Christmas time, or any random day of the year, the film never fails to disappoint, draw laughs and plug at the sentimental heartstrings.

Home Alone had its Australian theatrical release on December 13, 1990 through Twentieth Century Fox.

Click here to see our previously published review of review of Home Alone 2: Lost in New York. It is simple as good as the second.

Written By
James Madden
More from James Madden
It seems that the first two films I watched for this assignment...
Read More