You may be a bit perplexed about the choice of Chris Columbus‘ adaptation of JK Rowling‘s Harry Potter and the Philosopher’s Stone for a memorable Christmas flick. Yet, as tenuous a link as it may seem, please bear with me for a few moments.

At the very start of one of the most popular stories of all time, having lived his whole life in a sub-stairway shoebox, Harry Potter (Daniel Radcliffe) has never experienced a real Christmas for himself before. His idea of family bonding time is probably a smack on the back of the head when he gets the eggs wrong for his Uncle.

Yet, when a barrage of letter-bearing owls mysteriously arrive, Harry is whisked away to avoid learning his true identity. This leaves a barrelling mass of beard to hunt him down at a stormy remote island hovel. This half-giant, who calls himself Hagrid (Robbie Coltrane), is there to tell Harry that he is a wizard, that he is to start wizarding school immediately, and also to give him a birthday cake. The cake is badly needing the aid of a dictionary, but it’s a cake nonetheless, and it’s the thought that counts. 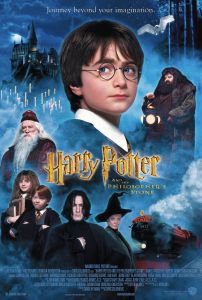 It is about half-way through this film that the students of Hogwarts – the grand old castle of legend and Harry’s new school and home – vacate the premises to take the Christmas holidays at home. How religion fits in with the wizarding world, I’m not entirely sure, but maybe the wizarding world knows something we mere muggles don’t (and don’t try and tell us that you haven’t tried a sort yourself into an online Hogwarts house quiz before!) This leaves Harry to his own devices in the castle alone. Well, not quite. Good old Ron (Rupert Grint) is still there.

It’s a bittersweet awakening for Harry in his first year of school. He finds out he’s a wizard. He also discovers that he is at the centre of a blood feud that will eventually bring the wizarding world to its knees and almost kill everyone he knows. It’s probably a good Christmas lesson; you can’t have everything. But, believe it or not, there are better gifts in store.

Here the seeds are sewn for Harry to take control of his destiny, having been (anonymously) gifted the invisibility cloak that would eventually help him get up to all sorts of brave deeds, and a few other dubious ones. It is also during this Christmas that Harry develops a new understanding of what it feels like to have something akin to a family — surely one of Christmas’s most important celebratory aspects — only one of the wizarding kind. A homemade jumper from Ron’s adoring mum might not have been as useful as the invisibility cloak, but it probably means just as much in the context.

Fantastically cast, dazzlingly realised and capably written for screen by Steve Kloves, this opening instalment started Harry Potter on a festive note, with a Christmas to remember for the eponymous hero. Incidentally, the film also confirms Alan Rickman, who steals the show as Severus Snape, as an unwitting Christmas movie specialist, also featuring in Die Hard and Love Actually. What a champ.