With The Passion of the Christ a surprise box-office hit in 2004, Hollywood, as it’s prone to do, briefly turned its attention to The Bible in the hope of emulating its success. The first film out of the gates (and the only one after its relative commercial failure) was The Nativity Story, the ultimate origin narrative of a teenage Mary being chosen to give birth to the Christian savior.

Directed by Catherine Hardwicke who had previously established her serious teen film credentials with the indie sleeper Thirteen and her excellent follow up Lords of Dogtown, and starring Keisha Castle-Hughes  who was hot off the success of her star making and Academy Award nominated performance in Whale Rider, the film had the promise of being a legitimately serious take on one of the world’s most famous stories. Unfortunately however, the results are somewhat mixed, with Hughes given little to do except look somber, and the original grunge style of Hardwicke’s earlier work replaced by a less interesting over-reverence to her subject matter that goes through the standard beats of the story while offering little new to it. 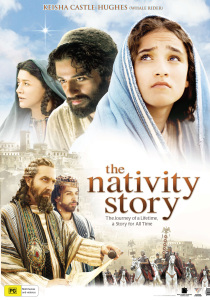 One of the things that it does add though, is the meaty sub plot of King Herod attempting to stop the birth of Jesus who is prophesied to eventually over throw him, that runs parallel to the main story. Lead by a fine turn from veteran character actor Ciarán Hinds as Herod, it comes to dominate the narrative as far more interesting than the main story, even if it is an all too obvious attempt to insert a stock standard villain that doesn’t really go anywhere by the time the film wraps up anyway.

Issues with the narrative aside, the film is beautifully staged by Hardwicke and filmed by Elliot Davis. The Middle Eastern locations add a strong period flavor to the film, which cannot be said to lack the feel of the times (although historians have since quibbled with many aspects of the film).

The film also features a fine early starring role from Oscar Issac who gives a compassionate and strong performance as Mary’s arranged husband, Joseph, who must first come to terms with his wife’s pregnancy and then decide to be the child’s earthly father. His conviction in the role is palpable and he makes the most from the film’s most wholly constructed character.

Despite its shortcomings, The Nativity Story for its strong points is a worthy rendition of its traditional narrative that will appeal most to the devout who might otherwise not want anything else, for everyone else though, it isn’t a particularly original or interesting take on the story.

Written By
Chris Smith
More from Chris Smith
“Remember, if it bends its comedy. If it breaks, its not”. Woody...
Read More