The Ref (1994) is a family Christmas movie with a difference: it doesn’t give saccharine sweet families getting along, instead it goes into a Christmas of family dysfunction, with Caroline and Lloyd Chasseur (Judy Davis and Kevin Spacey) hosting in laws, Grandma Rose, Connie and Gary (Glynis Johns, Christine Baranski and Adam LeFevre) and their two kids, John and Mary (Phillip Nichol and Ellie Raab).

They’re also hosting cat-burglar Gus (Denis Leary, in an early movie role). Gus is on the run from the inept local constabulary after coming off second-best against a booby-trapped safe and a Rottweiler. Also on the guest list is Caroline and Lloyd’s extortionally inclined son, Jesse (Robert J. Steinmiller Jr), who has bounced from one educational institution to another and landed in a military school where he’s blackmailing one of the teachers, Siskel (J. K. Simmons).

Director Ted Demme, and writers Mary Weiss and Richard Gravenese, put together a movie which speaks volumes about Christmas with people you barely know, in situations you can’t escape from. From the moment Caroline and Lloyd are taken hostage by Gus there’s a sense of being trapped. Absolutely no-one wants to be there. Gus wants to be far away but is stuck by the curfew, Jesse is avoiding going home, Connie and Gary feed themselves, the kids and grandma at a restaurant rather than eat the food at Caroline and Lloyd’s place. Finally, the happy hosts are in the process of a divorce, having begun the movie in therapy with Doctor Wong (B.D. Wong) whose persona Gus takes on to avoid being discovered when the in-laws turn up. And yet, despite the situation, Gus, Caroline and Lloyd become allies; is it Stockholm Syndrome, the act of hostages relating to the kidnapper, or something else entirely?

Ultimately, Gus is a catalyst, sparking the fuel which has been sitting beneath the Chasseurs the whole time, and creates a situation where Caroline and Lloyd can finally be honest with one-another. And when Caroline and Lloyd become honest, so too do Connie and Gary, much to the chagrin of Grandma Rose who is the real enemy here, played excruciatingly well by Glynis Johns. Grandma Rose turns from a minor annoyance to a full-blown villain, the woman everyone hates but has to put up with because she’s got the money. Indeed, her overbearing passive aggression seems at the root of the problems in the household. She becomes the grandmother no-one could love. 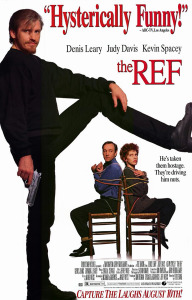 There isn’t a wasted moment in The Ref, everything is there for a reason and works within the narrative; as an exercise in efficient writing, it can’t be faulted; the promise of the first act is followed through in the second and given a satisfying conclusion in the third. The characters and dialogue — even Gus’s rants to Murray (Richard Bright)– seem natural and on the ball; Caroline and Lloyd’s arguments bounce around each other scoring spiteful points, yet there’s a sense, especially where their son is concerned, that they don’t want this to happen, but are being carried along by the inertia of too many lies and unspoken needs.

In other hands, with a different cast, this could have degenerated into pantomime, but the drama balances the comedy, the honesty of the characters becomes the guiding light. Indeed, it’s the personal moments where the movie really shines, from the conversation in the car when Gus takes Caroline and Lloyd hostage, the kitchen discussion with Gus’s inept partner Murray and then with Caroline and Lloyd, then the dinner scene where the cracks really start showing, right up to the moment where Caroline and Gus share a cigarette while Lloyd rises up and starts making sense, starts being truly honest. Caroline and Lloyd see each other for the first time in years, and so too do the family and Grandma Rose is disempowered at last.

This is an intimate telling of a family gone to pot, and there’s a touch of the fable with this Christmas tale, of the repressed masses finally casting off the chains of their master, all because a stranger came into their lives. In the end, despite appearances to the contrary, The Ref turns out to be a Christmas movie after all, and Caroline, Lloyd and Gus do escape and (possibly) live happily ever after.

Written By
Lisa Sinclair
More from Lisa Sinclair
Mark (Ari Millen), a Castor clone, has been shot by a vengeful mother...
Read More