Jason Sudeikis, Jason Bateman and Charlie Day must have had sore palms by the end of filming Horrible Bosses 2. So many high fives. Whether all these high fives were part of the script, or some were merely impromptu celebrations of their coming pay cheques, is another question altogether. Following on from the first instalment, the sequel again relies on the inane improvised banter between the bumbling trio: Nick (Bateman) and his deadpan dismay, Kurt (Sudeikis) and his bright-eyed teen outlook on life, and perhaps most endearing, Dale (Day) and his shrill jabberings. They do it well, but to say director Sean Anders is offering anything ‘new’ to validate another film would be pushing it.

This time around, the three have resolved to go into business together, working for themselves to avoid anymore horrible bosses (it turns out they themselves make pretty horrible bosses too – no pun intended). However, in the process of launching their saviour invention, the Shower Buddy, to the public, things go awry. The man who had promised to provide their road to riches is in fact a massive jerk who will do anything to eliminate any rivals. So, they are up a certain creek without a certain paddle, unless…

Well, they’ve done revenge before. Why not do it again? Just not murder, this time. It’s clear they’re no good at murder. This time it’s kidnapping – simple but foolproof, right? Yeah nah. 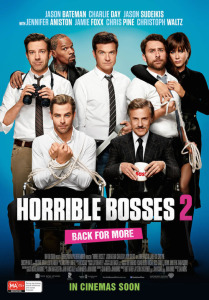 There is comedic brilliance to burn between these three leads and they mesh like few others. Add in Christopher Waltz, Chris Pine and recurring characters played by Kevin Spacey, Jennifer Aniston and Jamie Foxx, and surely this is a home run. Potentially.

It is an impressive ensemble cast, but the lack of imagination from Anders and John Morris’s screenplay is clear for everyone to see. The most brilliant parts appear to be the stuff of improvisation and natural talent, while the scripted attempts at humour are so puerile and wilfully offensive at certain times that it’s hard not to cringe. The sex addicts meeting makes for some particularly grim dialogue. Moreover, as the only major female character to string more than a sentence together, Aniston’s sex-crazed dentist serves only to emphasise how big a boys’ club this film really is. Intentional, maybe, given the main target demographic; but it wouldn’t hurt to give her some material that relies less on shock-factor.

Horrible Bosses 2 is bloody funny in parts, mainly owing to the personnel on screen, and the plot is reasonably solid and quick-paced. However, given the amount of talent that has been roped into this, it’s easy to suspect that Anders was hoping for star power to do most of the work. In that sense, it’s a bit of a waste.

Horrible Bosses 2 is in Australian cinemas from 11 December through Roadshow Films.

Written By
Angus Tonkin
More from Angus Tonkin
Few people dispute that Red Dog was a great yarn, but it...
Read More