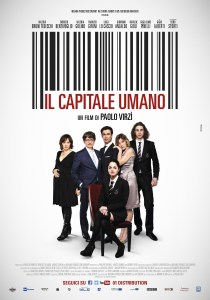 Film Synopsis:  On a wet winter night in Italy’s affluent north, a waiter is run off the road by an SUV and killed, entwining the fates of two families of very different social standing. Set against the aftermath of the European economic crash, secrets are everywhere, but vanity and greed are in plain view in a world where a person’s value is measured in euros.

Based on the novel by Stephen Amidon, Human Capital (dir. Paulo Virzi) is an engrossing thriller that paints a bleak and tragic portrait of current Italian society. Deceptively simple at first but building with perfect pace, Human Capital examines and reexamines the circumstances surrounding the accident with each of four chapters told from the perspective of a different character. Deceptions and cover-ups are deliberately and cleverly revealed right up to the final moments.

Paolo Virzì’s Human Capital was a runaway box office smash in Italy in 2014. A classy, gripping thriller executed by a top-line cast at the peak of their skills, the film has been chosen as the Italian contender for Best Foreign Language Picture at the 2015 Oscars.