You are reading this on the internet, probably with another tab opened on social media. There’s also probably a phone in your pocket, which has the ability to connect you with any human being currently on this earth and has access to a database in which every facet of human knowledge can be read about. Much like the printing press in the 1450s or the steam engine in the 1850s, this is one of those big inventions, whatever direction we as a species were heading, it’s been altered by this invisible entity which seems to be becoming a larger and larger part of daily life. Jason Reitman’s new film Men, Women & Children, which was adapted from the novel of the same name by Chad Kultgen (Reitman co-wrote the screenplay with Erin Cressida Wilson) explores how the internet has impacted, mostly negatively, on the lives of ordinary people using the stories of five interconnected Texas families, all of which are narrated by soothing British tones of Emma Thompson and are sandwiched between the framing device of the Voyager spacecraft leaving our galaxy.

Just to name a few, there’s the Truby family; in which Adam Sandler and Rosemarie DeWitt play a husband and wife who grew tired of each other long ago and both begin having affairs after organizing hook-ups though extra-marital sites. Their fifteen year old son (Travis Tope) uses internet porn daily has reached the point where he can’t get aroused via normal sexual practices and seems destined to turn into Michael Fassbender’s character from Shame. The Mooney family, a father and son who have lost all contact with each other on account of Tim (Ansel Elgort) dropping out of the football team and spending his every free moment playing an MMO, and his father (Dean Norris) struggling to come to terms with his wife leaving him for another man. Finally the Beltmeyer family, where the mother (Jennifer Garner) is so paranoid about the dangers of the internet that she monitors her daughter’s (Kaitlyn Dever) online activity with methods that seem more thorough than those used by ASIO. There’s also stories about an eating disorder, teen pregnancy, a suicide attempt and a fifteen year old girl trying to become an actress, whose mother has created a website of her risqué modelling that looks like it should adorn the cover of Zoo weekly.

The problems begin that with so much going on, being played by so many people, there’s inevitably going to be stories and performances better than others. The only few who stand-out are Dean Norris, who is always good, Adam Sandler who has proven in the past that he can take on serious roles with success and above all Kaitlyn Dever, who was outstanding in the criminally overlooked Short Term 12 and follows it up nicely here. That’s not even mentioning J.K Simmons, a Reitman staple and who seems to be currently more popular with the film-going community than popcorn, has what appears to have about two minutes of screen time. However, the problems go deeper than simple narrative saturation, most of these plot threads seem to be based on issues that older generations and mainstream media seem to decry teenagers for doing with the internet. They range from being thought provoking to ridiculous, none of them are particularly original and only a few of them have any pay off or an intelligent message to convey.

This is the sixth film by Jason Reitman (Son of Ivan, of Ghostbusters fame) and it seems that he of all people should have been able to handle this material much better. The heir to the throne of Reitman entered the film-making scene with the trifecta of Thank You for Smoking, Juno and Up in the Air – all of which explored pretty big issues with wit, humour and a skill that made him a new talent worth getting excited for. His career since then has been followed by three entries, each one less than the previous; Young Adult was alright but lacked the charm of the others, Labor Day remains a mystery of why Reitman even wanted to direct it and now Men, Women and Children seems to have reached a point where warning lights have started flashing, what happened to the Jason Reitman that showed such an exciting talent? 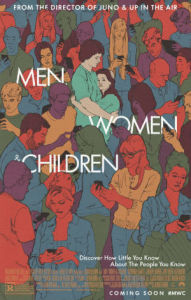 The rather strange question comes to mind; Just who is this film intended for? Front and center is the potential dangers of the internet which largely revolve around high school students, which makes it seem like a cautionary tale destined to be played to young teens. Yet, there are also segments with pretty blunt scenes of sexual affairs and coarse language that might indicate it’s for parents. Whoever it’s intended for, what it shows are fairly severe examples, some of which succeed and others that boarder on being almost fear mongering.

While this film unfortunately fails in most aspects, it still deserves credit; with all the meaningless dross coming out, it’s always nice to see a film that tries to delve into real issues with some ambition. However, it’s only when you try for a big swing that you can strike out so spectacularly and while Men, Women & Children gets points for exploring some pretty big themes, it doesn’t have anything new or particularly deep to say. It also never seems to go any further than simply observing the issue, the big summary seems to be: ‘the internet can be dangerous – be careful’ which, to be brutally honest, is a message that any normal, reasoned person would have picked up by this point.

Perhaps it’s due to the fact that we’ve seen the vast talent that Reitman previously displayed, or maybe this is just a film that wasn’t going to properly work whoever took the reins. Whatever happened, the end result is a film that doesn’t know what it wants to be, or leave you with a message that isn’t so obvious that any person with an iota of intelligence should have figured out long ago. Men, Women & Children isn’t recommended, and it’s sad to be saying that about a Jason Reitman film, it might be worth a look for the amazing cast that’s been assembled, but at the very least; Do not spend your time or money seeing this in a cinema.

Men, Women & Children is in Australian cinemas from November 27th through Paramount Pictures.