A man refuses to shit for a week.

On paper, it’s not the most appealing, let alone tasteful, premise. Yet Tony Mahony and Angus Sampson’s suspenseful drama-comedy The Mule is a surprising treat. It’s even a little clever.

Set in December 1983, in the north-western suburbs of Melbourne, The Mule tells the story of an international drug smuggling deal gone wrong. While not everybody will be able to relate to Melbourne’s drug underbelly, people will no doubt connect with the mule himself, Ray (Angus Sampson).

Clubman of the Year and local television repairman Ray lives with his mother, is socially awkward, and is easy to manipulate. He’s the kind of guy who’d never even contemplate committing a crime. All this changes on a post-season footy trip to Thailand, when Ray’s vice-captain and childhood buddy Gavin (Leigh Whannell) forces him into swallowing more than a dozen condoms of heroin.

When Ray is taken into custody by Australian police, he does not relent. Not only does he deny everything, but he denies himself his most basic bodily function in order to literally conceal the drugs inside him. It’s painful to watch him squirm, yet it’s satisfying to watch him stick it to the man. But Ray is merely one player in this tale. For every day that he resists arrest, the world with which he is familiar rapidly changes.

The Mule is a fascinating film for the way it highlights everybody’s consumption with self-interest. Ray’s predicament does not elicit sympathy from others, but brings out the worst in everybody. Ray’s parents are the most interesting to observe, particularly Noni Hazlehurst, appropriately cast as Ray’s over-bearing mother. In a performance not dissimilar to Jackie Weaver’s Oscar-nominated performance in Animal Kingdom, Hazelhurst steals every scene. 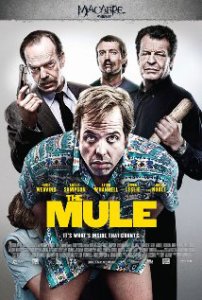 Likewise, every other character seemingly wants something out of Ray. For some it’s a confession, for others it’s the drugs in his belly. Ray remains the only constant, sticking to his guns and remaining loyal to those around him, even though they don’t necessarily want the best for him. His motivations for doing so are unclear. But regardless of whether his character is a portrait of stupidity, blind loyalty, or dedication, it’s clear that he is the winner at whatever mad game is unfolding around him.

Speaking of self interest, Sampson should be applauded for claiming the protagonist role in his own film. By dumbing himself down to the appropriate level, Sampson is convincing as a simple minded yet tactful oaf. From a comedic perspective, he’s also the sacrificial lamb of the film. The joke is always at Ray’s expense; rarely does he get the opportunity to directly show off his comedic wares. That responsibility is largely taken by Hugo Weaving, another stroke of casting genius. Weaving plays the ballsy, misogynistic cop, who encapsulates all the 1980’s Australian stereotypes.

It’s a bit of a shame that there’s not more comedy in the film – the gags can be quite subtle and character based and some of the scenes are thematically dark. Nevertheless, engaging editing and cinematography give the film a lighter look than most crime films, reminding audiences that – after all – they are just watching a film about a man who won’t shit.

Available to digitally own from 21st Nov through Entertainment One. Selected screenings happening now.

Written By
Kevin Hawkins
More from Kevin Hawkins
It doesn’t matter how serious your film is; you can always make...
Read More