Christopher Nolan has already cemented himself as one of the greatest directors of all-time. It’s a honourable title, but it does come with the price of heightened expectations. Not only has Nolan created a true science fiction epic, he’s even managed to exceed expectations yet again with his most complex, original and heartfelt film to date.

Set in a near dystopian future, Earth is struggling to cope with a lack of food and extreme changes in climate, with humanity on the brink of extinction. After NASA discovers a wormhole in outer space, Cooper (Matthew McConaughey), along with a team of brainy scientists led by Amelia Brand (Anne Hathaway), trek through the wormhole in order to find a new planet that can sustain life and ultimately save humanity.

Matthew McConaughey is terrific as Cooper, delivering a seamless and heartfelt performance not only as the leader of the space voyage but also as a father trying to find a sustainable future for his children. Anne Hathaway is very effective as Dr Brand, playing her character with a respectable amount of seriousness and wit. Michael Caine plays Michael Caine as per usual, providing plenty of exposition for the audience to catch up with the film’s speedy pace, despite its lengthy running time. Wes Bentley does well with a rather undeveloped and banal character and Matt Damon has a nice little troublesome sequence as well, while Jessica Chastain, Casey Affleck, David Gyasi, John Lithgow, Mackenzie Foy and Topher Grace deliver solid performances with their smaller roles. And to the Nolan brothers’ credit, the robot Tars (voiced by Bill Irwin), who carries some resemblance to HAL, supplies some much-needed humour in such an austere film. 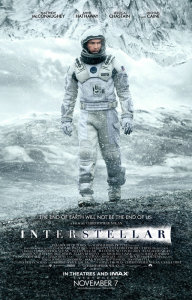 Interstellar gives us an interesting aspect of time, both in the story and in the editing style. Lee Smith, who has edited most of Nolan’s films, leaps through time ruthlessly, transitioning from Earth to space not unlike the way Kubrick did in 2001: A Space Odyssey. Although there is still a good half hour down on Earth at the beginning, it seems likely that the film could easily have gone over three hours considering the pacing. This is not a negative, because as soon as the crew arrives in space, that is when you realise the film’s true science fiction qualities. Hans Zimmer’s score is considerably original to his last encounters with Nolan, dropping ‘the big drums’ as Nolan requested, but never short of being epic and moving. Nathan Crowley’s meticulous production design is a pleasure to behold, while the futuristic space suits designed by Mary Zophres wonderfully pay respect to the great science fiction costumes that inspired the film . Hoyte Van Hoytema’s naturalistic cinematography is truly breathtaking to watch and a more than worthy substitute for Nolan’s regular director of photography, Wally Pfister, who was busy working on Transcendence.

Scientific and mathematical theories are in abundance here (based on the works of theoretical physicist, Kip Thorne), making Inception look like a children’s picture book in comparison. Some audience members will appreciate the film’s complexity, others will find it tedious, but Nolan uses it in a way that enables a greater emphasises on the core human emotions of the story, the scenes that are about survival, fear and loss, which are some of the best scenes in the film and ultimately some of the best of the year. The visual effects are mesmerising and not far behind Gravity‘s groundbreaking effort last year. Nolan takes us to other worlds and beyond with meticulous visual details yet there is still a strong sense of familiarity on these planetary wastelands, not unequal to some of the harshest places on Earth, further enhancing the film’s documentary-style camera work.

Interstellar is an experience. Beneath all the astrophysics and the complicated discourse, here is a film about love and pain, a conflict between what’s ethical and what’s necessary for humans to survive in the future. Its parallels with 2001 are deliberately clear, from the visuals to the music, while still displaying plenty of original ideas to become its own inspiration. Interstellar is pure sci-fi and it is Nolan’s most ambitious film to date, and for the most part, he succeeds. Again.

Interstellar is in Australian cinemas from 6 November through Paramount Pictures.