Back-stories are tough. They can be done, but normally, when you’re messing with classic literature, it’s best to steer clear, regardless of your historical mindset. Debut director Gary Shore’s Dracula Untold seems like a fitting a case in point.

Before Dracula became Dracula, the most famous vampire of all went by the name of Vlad the Impaler. Sold as a child to the Turkish Sultan to be whipped into a hardened warrior and taught to feel nothing as he slaughtered innocents, Vlad (Luke Evans) endured years of blind servitude before he was able to rise above the hordes as Vlad the Impaler, a warrior of legendary stature. By sheer strength, he proved his worth by becoming a survivor and eventually returning home to Castle Dracula to rule over his family’s legacy.

Ten years exactly have passed since his return and Vlad has found contentment with his wife, Merina (Sarah Gadon, Belle), and their son, Ingeras (Art Parkinson, otherwise known as Rickon Stark in Game of Thrones). The castle is a picture of merriment with Vlad the toast of the court, his impaling days a distant memory. However, old secrets don’t slip away easily, and when the Sultan Mehmed (Dominic Cooper) plants his colossal Turkish army on Vlad’s doorstep, threatening annihilation unless Vlad sends him 1000 boys, including Ingeras, as tribute, Vlad is faced with a sticky situation. The family man in Vlad refuses but desperate times call for desperate measures, and the dark terror atop the mountain upstream (played by Charles Dance) from Castle Dracula holds the only force that can guarantee his family and people’s safety. Though, as we all know, deals with the devil always have a catch. 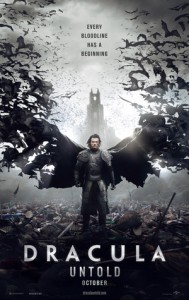 Vampires as a whole have been well overdone in the last decade. So at this point in time, for this reviewer, yet another exploration of the vampire psyche is frankly a tiring prospect. Nonetheless, Dracula stills remains the quintessential member of the vampire community and so putting him in a fancy dress action blockbuster and a faintly historical context could be a winner. The design here is certainly suitably grand, and Luke Evans has the presence to potentially pull it off.

Dracula has always been a menacing villain, ostracised from society but experienced in the arts of seduction and deception – best served with the moral compass of Jack the Ripper. His presence has always been most effective in fleeting glimpses. Yet here, as Dracula himself is on screen for the whole film, we are left bereft of what has made Dracula such a appealing cinematic character.

Instead, our villain here, Mehmed, is neither menacing, nor particularly cunning or witty. Put it partially down to a miscasting of Dominic Cooper, or perhaps his comically anachronistic hairdo, but be sure to lay most of the blame on the executives who entrusted a mega budget to a group of first-timers. This mistake certainly shows in a script (by first-timers Matt Sazama and Burk Sharpless) that is rarely willing to venture past the cliché, streaming through a frustratingly straigthfoward plot that generates minimal suspense, dread and/or excitement. Even the special effects seem disappointingly pedestrian with repeated displays of Vlad disintegrating into bats adding little.

In all, it’s disappointing to see such a talented cast wasted in this thoroughly forgettable addition to the Dracula narrative arc.

Dracula Untold was released in Australian cinemas on October 2 through Universal Pictures.

Written By
Angus Tonkin
More from Angus Tonkin
In the mid-20th century, Swiss-Italian artist Alberto Giacometti was one of the...
Read More