In getting the financing for his second effort after his first film Garden State quickly became a fan favorite in 2004, co-writer/director/star Zach Braff followed the Veronica Mars movie route of appealing directly to his fan base by trying to raise half of his budget for his new film, Wish I Was Here on the crowd source funding website Kickstarter. He achieved his goal quickly enough before coming into a storm of controversy when he followed that up by also getting traditional investor funding as well, effectively forging an uneasy mix of those who were going to profit financially from their investment and those that weren’t. Regardless of the dubious financing involved, Braff has crafted another idiosyncratic blend of comedy and high drama that will more than satisfy fans of his first film, while perhaps leaving others somewhat wanting.

The film follows a struggling middle aged actor, Aidan (Braff) who suddenly has to look after his two kids (Joey King and Pierce Gagnon) when his rich father (Mandy Patinkin) can no longer afford their tuition at an exclusive Jewish school after being diagnosed with terminal cancer. While trying to re-establish a connection with his two children and his ever-patient wife (Kate Hudson) who works so he can keep pursuing his dream, Aidan must come to terms with his father’s inevitable death while trying to help reconcile his father’s relationship with his brother (Josh Gad). 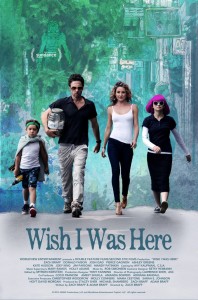 In the relatively brief running time of 106 minutes, Braff fills his film completely with an entirely involving narrative, while also exploring the themes of faith, religion, dreams and middle aged malaise. As a filmmaker, he is quickly becoming a foul-mouthed Woody Allen with his thematic preoccupations and style, but he does so incredibly well while also striving towards his own individual piece of film making territory. If he doesn’t entirely achieve a coherence here – with his loaded dialogue that straddles the thin line onto parody and a tendency to pack every scene with so much whimsy that it loses its effectiveness – he shows the promise that he will get there. Regardless, the journey of this film is well worth taking anyway.

The film features great performances from its ensemble cast. Braff tailors his role for him perfectly while also giving him a more dramatic edge than we’ve seen. Josh Gad and Jim Parsons are great in supporting roles that beg for me screen time, but Joey King as Braff’s teenage daughter walks away with the film in one of the best teenage performances of recent years.

Wish I Was Here is a film that needs to be truly embraced by the viewer. If you can, then you’re going to absolutely love it, if you can’t then… Well, maybe Braff’s movies aren’t for you.

Wish I Was Here is in Australian cinemas from 18 September through Transmission Films.