The world of cinema is full of tales of moves that almost got made: Stanley Kubrick’s Napoleon? Sergio Leone’s Stalingrad? Tim Burton’s Superman Lives? Darren Aronofsky’s Batman: Year One? All could have resulted in masterpieces and just the fact that they almost happened is enough to make die-hard film fanatics salivate. Before it eventually found its way to the screen in the form of David Lynch’s B-Grade so-bad-its-awesome extravaganza in 1984, one such film was an adaptation of Frank Herbert’s seminal science fiction classic Dune, which was going to be made by art-house aficionado Alejandro Jodorowsky who was riding high off the surprise commercial success of El Topo in midnight screenings. It is this potential adaptation that director Frank Pavich explores in the aptly titled Jodorowsky’s Dune. 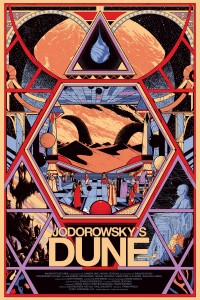 The documentary, which played to sell-out audiences at MIFF earlier this year, offers a thorough account of Jodorowsky’s career and the making of the classic that wasn’t to be. Talking head interviews with those that are still alive (with some stock footage of those that aren’t) are mixed in with what might be the highlight of the film: the potential artwork. As well as shots that linger on the designs themselves, Pavich animates entire sequences from the storyboard to give what would probably be a good indication of how they would have looked if they were shot, and they’re incredible, particularly the opening tracking which would have out done Orson Welles’s Touch Of Evil – as Jodorowsky had intended.

Jodorowsky himself is the main interviewee and makes for an engaging and entertaining subject. With his thick, often subtitled Spanish dialect, he seems as passionate about his project now as everyone recalls him as being then. He’s also crazy. Absolutely insane in his ambition and one can’t help but wonder given his process if the film would ever have actually come to completion. Regardless, it makes for some fascinating and unbelievable stories that would even shock Werner Herzog who would undoubtedly have an affinity for Jodorowsky.

Despite its interesting subject matter and Pavich’s assured execution, the problem with the film is that the finished result feels more like a DVD supplement than a feature film and at a mere 90 minutes of screen time, it still feels padded out. Regardless, film fans and science fiction fans will not want to miss out.

Jodorowsky’s Dune is in Australian cinemas from 18 September through Walt Disney Pictures.

Written By
Chris Smith
More from Chris Smith
Continuing MIFF’s dedication to including retrospective programs in their lineup, this year...
Read More