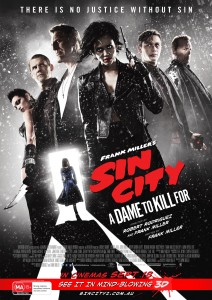 Courtesy of Icon Films, Film Blerg is giving away 5 double passes to see the SIN CITY: A DAME TO KILL FOR, in cinemas from September 18.

Film Synopsis:  Co-directors Robert Rodriguez and Frank Miller reunite to bring Miller’s visually stunning Sin City graphic novels back to the screen in SIN CITY: A DAME TO KILL FOR. Eva Green stars as Ava, a temptress who enlists Dwight McCarthy (Brolin) in a bid to escape her ex-husband. Joseph Gordon Levitt plays Johnny, a mysterious gambler set on taking down his sworn enemy in a high stakes game of life and death. Weaving together two of Miller’s classic stories with new tales, the town’s most hard boiled citizens cross paths with some of its more notorious inhabitants. Newcomers Juno Temple and Jeremy Piven join the all-star cast including Mickey Rourke, Bruce Willis, Rosario Dawson, Jessica Alba, and Jaime King who will be making their return to SIN CITY: A DAME TO KILL FOR.