Boyhood is writer/director Richard Linklater’s testament film. A masterpiece, destined to be remembered as one of the best films of the decade (if not the best). Following a similar framework as his ‘Before’ trilogy (Before Sunrise, Before Sunset and Before Midnight) which has so far chronicled the relationship of a couple from the idealism of their mid-twenties to the realities of their forties, Boyhood follows the childhood of Mason (Ellar Coltrane) from age six when we meet him, until the age of eighteen when he goes off to college. In true Linklater fashion, he shot the film over a 12 year period, getting the cast and crew back together every year or so for a couple of weeks of filming, and the result is perhaps the most intimate epic ever made.

As well as Mason, we become intimately involved with his family. He has a slightly older sister, Samantha (Lorelei Linklater – the director’s daughter), and they both live with their single mother (Patricia Arquette) who through the film goes through two husbands with little success, which we see played out from the perspective of Mason. We also come to know and love his father (Ethan Hawke) who is essentially a reprise of his Jesse role from the ‘Before’ films, who arguably grows up more than Mason in the span of the film. 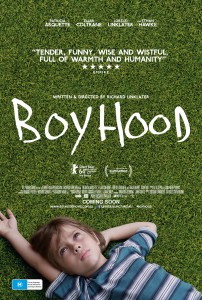 It is the process of growing up that the film is primarily concerned with, and it shows both physically and through the maturity of the characters. Instead of drawing attention to the time cuts, Linklater instead goes straight to them, allowing the changes in hair length or fashion to bring the audience up to speed. One of the most surprisingly touching moments in the film comes when we notice during one of these cuts that Mason’s voice has broken and he is no longer the child we met at the start of the film but his own man, and this becomes evident as he grows into a thoughtful, intelligent and wearied teenager who suddenly drinks beer and smokes pot on Saturday nights instead of riding his bike up the neighborhood street or playing video games with friends.

Although primarily concerned with the ‘boyhood’ of the film’s title, the nature of the production also means it encompasses the last 12 years of the world itself, particularly from an American perspective. We see the country’s engagement in Afghanistan and Iraq and we see the changing landscape of technology from video games to the advancement of mobile phones into the I-phone. It’s hard to conceive of a period film as ever getting all these touches as perfect as they’re done here.

From the opening moments where the screen is black and Yellow by Coldplay kicks in before the story starts proper, it is clear that Linklater is aiming for a masterpiece, and he succeeds entirely. Also featuring his trademark philosophically profound psychobabble dialogue, and moment after moment of profound truism, Boyhood is a generation defining cinematic experience. Don’t miss it.

Boyhood is in Australian cinemas from 4 September through Universal Pictures.

Written By
Chris Smith
More from Chris Smith
The new film from main-stay of the French cinema, Bertrand Tavernier (In...
Read More