The new film from perhaps the most celebrated auteur from all of Asia, maybe even world cinema in general, should be met with celebration; especially given it is a return to his native homeland after a brief foray into American cinema with My Blueberry Nights. Given its subject matter and that the filmmaker has handled similar material with seeming ease and virtuosity in Ashes of Time; it should be a great film, a masterpiece even. The fact is though, Western audiences won’t know for a while, because the version of Wong Kar-Wai’s The Grandmaster that’s found its way to our cinemas isn’t the 130 minute cut for its Chinese release or the 123 minute version that won so much praise at the Berlin and Hong Kong International Film Festivals; but instead a 108 minute abridged version prepared for American audiences by the Weinstein Brothers. It’s a shame too, because somewhere in the mess of this version, is the masterfully detailed and absorbing biography of one of martial arts’ greatest figures.

Already having been the focus of a recent film in 2008 which bore his name, The Grandmaster takes a stylized look at the life of Ip Man (Tony Leung), whose fighting skills made him legendary in the early to mid-19th century until the Second Sino-Japanese War derailed his ambitions. Unlike most biopics which tend to give an episodic account of their subjects life, The Grandmaster’s narrative is structured around its fight sequences which in the context of the story become just as important as the dialogue scenes. 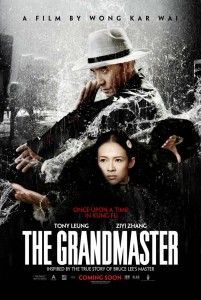 From the film’s opening rain-drenched scene of Ip Man taking on a gang alone, to the incredible showdown of his love interest, Gong Er (Ziyi Zhang) and her adversary Ma San (Jin Zhang), the fight scenes are incredible. Kar-Wai’s sense of style is at its peak in these extended sequences that push the possibilities of fight and movement on film. The film must be seen on the biggest screen possible to get full advantage of the visual richness and poetry on display here.

Less satisfactory then the films fight scenes, is the structure of this version, where whole events (such as the war that divides Ip Man and Gong Er) happen off screen in one of the films many, many screen texts, before cutting back to it much later. It’s hard to accurately describe the offensive of screen texts which cheat the audience of the story the film is allegedly supposed to be telling, but suffice to say these are the same texts which will introduce a characters name or place before it is mentioned in dialogue seconds later. Apparently Kar-Wai supported the making of this simpler version; instead he has helped tailor a film for the perceived ignorance of an audience unlikely to watch it anyway.

A must-see at the cinema for the visual virtuosity on display, it will be particularly interesting to see how this version of The Grandmaster measures up to the others when they (hopefully) reach our shores.

The Grandmaster is in Australian cinemas from 4 September through Roadshow Entertainment.

Written By
Chris Smith
More from Chris Smith
I, Anna is a highly stylized modern noir that unfolds as a...
Read More