Hollywood’s obsession with the undead has become an international epidemic, with New Zealand the latest to have caught the bug. But there’s nothing Twilight or True Blood-esque about What We Do In The Shadows; it’s a dark yet sharp mockumentary, sitting somewhere on the spooky spectrum between The Adams Family and Shaun Of The Dead.

What We Do In The Shadows first introduces us to Viago, Deacon, and Vladislav (Taika Waititi, Jonny Brugh, Jemaine Clement), a trio of fashion-conscious vampires who play Middle Eastern folk music together by day, and who feast on human blood by night. But when Deacon’s ‘master’ Jackie (Jackie van Beek) invites her ex-boyfriend Nick (Cori Gonzalez-Macuer) to a feast with the vampires – and subsequently becomes one of their victims – the trio’s dynamic is thrown out of sync. Nick embraces the vampire life, abusing his powers by sharing his status with everybody he meets. Moreover, ethical dilemmas arise when he invites his best mate Stu (Stuart Rutherford) – a human – to hang with the group. You could argue that the premise of the film is worthy of nothing more than a 5-minute sketch on a TV skit show, but credit must go to co-directors Clement and Waititi for preventing the skit-like film from ever fizzling out.

The New Zealand cast and crew give a fresh take on the vampire genre, deriving extra humour from their accents, and unique brand of Flight of the Conchords-esque humour. FOTC bassist Clement is at his melodramatic best as the over-confident leader of the group, while Rhys Darby – as the chief werewolf – demands laughter with every one of his lines. Furthermore, there is something particularly hilarious about humble, unassuming New Zealand town folk sharing their streets with party-hard vampires, zombies, werewolves and witches. 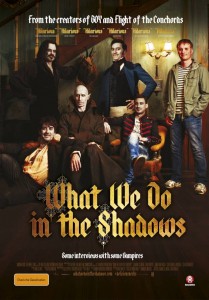 Much like Warm Bodies (2013), What We Do In The Shadows does well to humanise the undead, proving that they’re more than flesh and bone. It gives personalities and charm to characters that Hollywood has typically portrayed as homogenous agents of evil. As such, even the most gory of death scenes aren’t particularly difficult to watch; we know what’s going to happen, and we’re more than happy for the vampires to claim their victims. More importantly, these scenes are absurdly hilarious, best evident by Deacon’s Transylvanian mispronunciation of the word ‘spaghetti’ (‘bisgeti’).

It should of course be acknowledged that there is no such thing as the undead. Therefore, in making vampires seems more accessible, What We Do In The Shadows is not trying to prove any over-arching point; it’s just being funny. At most, the film is poking fun at the documentary genre, but one suspects the point of the film was to fulfil a rogue idea that popped into Clement and Waititi’s heads one day.

The mockumentary medium somewhat limits the film, in that multiple storylines are accommodated, as opposed to one central narrative. However, the diversity of perspectives – not limited to the vampire characters, but also to those living in the human world – ensures that there are enough gags to keep the film moving.

What We Do In The Shadows opens in Australian cinemas on 4 September through Madman Entertainment.

Written By
Kevin Hawkins
More from Kevin Hawkins
With Easter around the corner, it’s only fair that we get to...
Read More