We’ve seen Woody Allen do it all before. A cynical older man; an enigmatic and beautiful younger woman; and a picture perfect European setting. Indeed, there will be no shortage of audiences – both fans of Allen and otherwise – who will cringe at the controversial director’s age-imbalanced matchmaking in Magic in the Moonlight.

It’s easy to be dismissive and claim that Magic in the Moonlight is yet another opportunity for Allen to live out his unrealistic romantic fantasies on screen. But when engaging with Magic in the Moonlight, it’s wise to distance Allen’s personal life from his filmography. That’s because Allen, as he has done many times before, allows his feature to speak for itself. Sure, the pairing of 25-year-old Emma Stone and 52-year-old Colin Firth looks awkward on paper. But on screen, it all comes together… like some kind of magic.

Magic in the Moonlight is the latest installment in Allen’s one-film-a-year addiction. Like many of his works, it’s a welcome addition to his collection, but is unlikely to disrupt the top ten lists of the Allen faithful. Set in France, the stylized 1920s picture follows British magician Stanley (a.k.a. Wei Ling Soo, played by Firth) in his attempt to debunk the apparently fraudulent medium Sophie (Stone). But Sophie’s abilities are so impressive that even the most intelligent and skeptical observers are convinced that she is the real deal, Stanley included. In doing so, she opens the eyes of the ever-rational Stanley, giving the otherwise emotionless lead the kind of happiness Jennifer Ehle took the best part of 330 minutes to derive in the 1995 Pride and Prejudice mini-series. 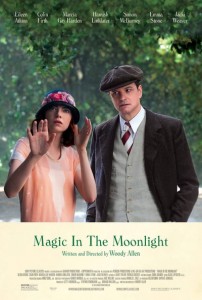 Allen captures the mood of the ‘20s with exquisite style, taking a leaf out of Alfred Hitchcock’s book. Allen borrows everything from the master of suspense, from over-exaggerated caricatures and set-pieces, to cross fades. More importantly, Allen isn’t afraid to toy with his audience, forcing them to constantly second guess themselves. Sophie is an enigma for much of the film, her remarkable powers leaving those around her in awe. Our perception of Sophie runs consistent with that of Stanley, who Allen stalks throughout almost every scene. As such, as Stanley becomes more and more convinced of Sophie’s supernatural abilities, the more convinced are we.

This is not Allen’s first flirtation with the spiritual world; his recent works Midnight In Paris (2011) and Scoop (2006) similarly challenge the metaphysical world. But Moonlight’s ambiguity and apparent grey areas are the key selling point of the film. Despite being quite a light feature, Magic In The Moonlight is not afraid to tackle deep questions concerning objectivity, naturalism, rationality, and the potential existence of a deity. The conversations never quite go beyond Religion and Spirituality 101, but it’s refreshing to engage with such big themes through a relatively mainstream film. Magic In The Moonlight seems to neither endorse nor dismiss religion, instead showing us that both perspectives are valid, and can deliver great satisfaction to those who prescribe to it.