After tackling zombies in their crazy, anything goes debut Undead, and then vampires in their still much under-appreciated masterpiece Daybreakers, the local writing and directing duo of Michael and Peter Spierig take on time travel in their new thriller Predestination.

Set in an alternate universe, the film follows a time travel cop (or temporal agent), played by Ethan Hawke, who is sent back to track down the so-called “Fizzle Bomber” whose attacks will eventually culminate in a giant destruction of New York. His investigation finds him tending bar in 1970’s Manhattan when a transgender man (Sarah Snook) comes in with the promise of being able to tell him the wildest story he’s ever heard. The film flashes back as he narrates the story, and indeed, it is one of the wildest stories ever recounted in the cinema.

Technically, the film is perfectly realized. The Spierig Brothers continue to cement themselves as two of the most assured visualists of the emerging wave of new genre filmmakers – truly they are world class, while still managing the inventive whimsy of their debut. Production designer Michael Putland does a particularly good job of turning Melbourne locations into the period America where the film takes place, as well as layering a nice sci-fi exterior. 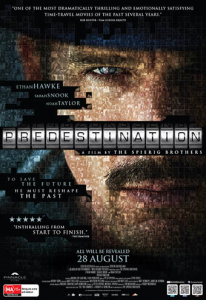 Hawke is in typical strong form as the dedicated cop, elevating a role that could easily have fallen into cliché in lesser hands. Veteran Noah Taylor is given the relatively unrewarding role of Hawke’s boss but makes the most of his brief screen time. The relatively unseen Sarah Snook does an incredible job of balancing her dual-sex character, never going overboard into theatrics, but perfectly balancing a consistent person who has these incredible things happen to her. A good deal of the films publicity has thus far centered on her performance – and justifiably so.

Viewer’s satisfaction of the film will ultimately rest on their ability to work out the several twists on which mystery narrative entirely rests upon. Unlike most ‘twist’ movies like The Sixth Sense, The Usual Suspects or Fight Club where the surprise is only revealed in the final act and doesn’t really effect the story that’s come before it, Predestination leaves a trail of breadcrumbs which will make it all too easy for savvy audience members to work out what’s happening ahead of time, making for an enjoyable enough experience, but just not the great one it could otherwise have been.

Extremely well made and dealing with some interesting concepts of time and identity, your ultimate enjoyment of Predestination will depend on your ability (or lack thereof) to see what’s coming. A worthy achievement none the less.

Predestination is in Australian cinemas from 28 August through Pinnacle Films.