For anyone considering going to see Some Velvet Morning, there’s one thing you should know: you mustn’t leave the room until the credits roll. You may not like the ending, you may be unsettled by it, you might think it a cop-out – regardless, it will force you to completely reconsider what you have achieved by sitting out this big-screen bottle episode from writer-director Neil LaBute. Don’t be surprised if you don’t appreciate the results.

Here, Stanley Tucci plays Fred, a man who arrives on his former mistress Velvet’s (Alice Eve) doorstep, unannounced and bags in hand. He claims to have cleared out his wardrobe after twenty years of marriage, in the hope of rekindling the sparks of their adulterous relationship, which had been broken off four years previously. Velvet, as she is loath to be called, doesn’t see it happening and is keen to be rid of him, but Fred is a persistent man, with no small amount of pent up frustration.

So whose resolve will break first? 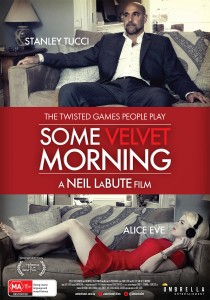 LaBute’s aim to extract emotion from his audience is nothing if not strident, and the provocative script – dealing with themes of misogyny, domestic violence and obsession – will incite strong reactions, particularly from its shocking climax. The strength of the audience’s reaction, however, does not always correlate with the skill of the playwright. After all, it’s hard to forgive someone who insists on making you spend 80 minutes with utter bastards. That the actors, Tucci and Eve, are actually quite good at embodying these characters only enhances that distaste.

After an intriguing set-up that plays along in a light-hearted daze of misunderstandings, LaBute starts to miss the mark with his use of domestic violence to ‘enhance’ the tension and shock value. He seems to revel in prolonging the conflict of these two estranged lovers, sometimes to the point of tedium, but there’s scarce honesty in this film that would encourage you to empathise or sympathise with either character. Then you combine this such a callous ending that undoes any point that this film might have established (whether that be modern attitudes towards women, or the price of infidelity etc.), and this can only be seen as a bad joke, and, at that, one in very poor taste.

Twist endings, if done well, can enrich a film’s message and make a second viewing all the more fulfilling. But when characters are involved in such sordid, selfish dealings as these, there is no reward for enlightenment  — only bitterness at having been taken for a ride. Not only is Neil LaBute no stranger to controversy, but he courts it willingly, so hopefully he doesn’t mind a bit of backlash when he treats us like idiots.

Some Velvet Morning will be on limited release from July 31 through Umbrella Entertainment.

Written By
Angus Tonkin
More from Angus Tonkin
Adrian (Devos Murphy) is a ten-year-old growing up in a un-named dilapidated New...
Read More