Who would’ve thought watching paint dry could be so captivating? Like seriously, Penn and Teller’s Tim’s Vermeer is essentially 90 minutes of watching a middle-aged man paint. Yet there’s something strangely compelling about this documentary, making it one of the most unique films you are likely to see all year.

Tim Jenison is not an artist – you wouldn’t have heard of him, nor seen his work in any galleries. On the contrary, he’s an inventor and the kind of person who needs to know the solution to every problem. And if he can’t find that solution, he’ll make one.

The mystery in question is how 17th century painter Johannes Vermeer managed to paint his subjects with such photographic likeness. Like Jenison, Vermeer never undertook any formal artistic training. Long story short, both Tim’s method and the final outcome are worth waiting every brushstroke for, culminating it a deeply satisfying feature. 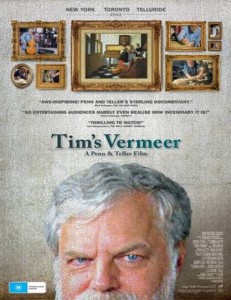 It’s fitting that magicians Penn and Teller are the men behind this film, as Tim’s project blows the cover of Vermeer’s works of artistic magic. But Tim’s Vermeer will not make you lose any respect for Vermeer or other painters of that era. Tim’s project, from start to finish, takes 1825 days, dispelling the notion that painting a pretty picture is a leisurely pastime.

The film does well to convey the enormity of the task without testing the audience’s patience. The at-times pedantic level of detail won’t be to everybody’s pleasing, but relaxed audiences will find themselves entranced by Tim’s step-by-step process and his ongoing problem solving. The long montage scenes allow for more therapeutic contemplation than tension, thanks primarily to the classical music soundtrack.

Given how much time is invested in Tim’s painting efforts, one might suspect this is purely a film for art buffs, particularly those with a fondness for Vermeer’s works. There is some degree of truth to this, but it would be far more appropriate to consider this a film for scientists. Tim’s capacity to make art an objective medium should shape the way audiences think about art, challenging their pre-conceived notions about the disparity between science and art. At the very least, the film may motivate science nerds to dedicate a bit more time to quiet reflection upon their next gallery visit.

Tim’s Vermeer is in selected Australian cinemas from 3 July through Sony Pictures.