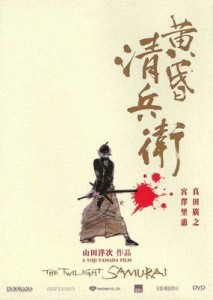 Seibei Iguchi (Hiroyuki Sanada), a low-ranking samurai, leads a life without glory as a bureaucrat in mid-19 century Japan. A widower, he has charge of two daughters whom he adores and a senile mother. He also works in the fields and performs piecework to make ends meet. New prospects seemingly open up when Tomoe (Rie Miyazawa), his long-time secret love, divorces her brutal husband. However, even as the Japanese feudal system is unraveling, Seibei remains bound by the code of honour of the samurai and by his own sense of social obligation.

NICK: I guess the title has a lot to do with the setting. Like a lot of samurai films it is set just before the end of the era of the samurai, with the [coming of the] Meiji Restoration. I guess this is set just before the opening up of Japan to the West, the coming of the gun, which is a big part of it [the end of the samurai era; the coming of modernisation] of course. The thing that I think that is great about this film, compared to other samurai films is that it is focussed on that domestic setting, but also has so much to do with the duty and obligation of that role in society [the samurai class].

NICK: I think the choice of the protagonist as a petty samurai is interesting, in that he is in a peacetime situation, he is doing almost clerical work, but he is still in reserve as a soldier if need be. So he has been trained and they said he was a former instructor, so he is quite skilled, but you know, his skills are wasted.

JO: And they only emerge gradually, which I quite liked.

NICK: Yes. And it has so much more power the violence in the film [due to] the restraint.

SCOTT: Yeah, its an incredibly restrained film, and his [protagonist Seibei Iguchi’s] modesty is reflected not only in the household [setting] but also in the film overall. It is just such a modest film…and things just unfold so beautifully…I thought it was one of the best films I’ve ever seen.

SCOTT: [The setting is] very pastoral, there are scenes where it must be autumn or something; there are flowers from the trees just floating down to the ground…

SCOTT: Yeah. And the river, the fields…but then there’s a scene where, I remember reading a book of Greek mythology when I was a little kid at my grandparents house whenever I went there and it was like when he’s [Seibei] gone on the quest to kill Zenemon Yogo (played by Min Tanaka), there’s a line of corpses, there’s the news of people going and trying [to kill him under orders of their clan leader after he refused to commit hara-kiri at his master’s command because he knows the end is near for the samurai and their customs, so what is the point in wasting his life?] and dying. There’s the darkness of him entering this labyrinth…

JO: It was scary.

SCOTT: Well it reminded me of the Minotaur, you know, I think its Theseus…

NICK: And how they don’t show him [Zenemon Yogo].

SCOTT: Yeah, in a film that has so much else, to have that as the start of the third act – its just an amazing movie.

NICK: Yeah it’s that [sense of] fatalism because you know what’s riding on it; it’s not just [Seibei’s] life, but all these women are probably going to die [his two daughters and senile mother].

JO: Hmm, without him. Yeah, I thought it was a very beautiful film, and I was thinking about it in terms of the theme of courage and thinking that it really gendered that concept that quite a lot in this film. I found compared to all the other samurai movies I’ve watched in my life, I found this a feminine film. Partly because of that domestic setting and the focus on the rhythms of everyday life which are really quite beautiful, and reminded me of Ozu’s Tokyo Story (1953). The movements around the house …

NICK: And everything with the [elderly senile] mother in a way…

SCOTT: And there’s so much of the girls in the film…

JO: Yeah that’s right, and they’re lovely, with rosy cheeks and everything. But for me the main character struggles with what it means to be a man, and that courage has this very limited definition within that culture. The other men are making fun of him because he won’t come for a drink or come to leer at the women, and he is quite content to courageously just be there for his family. And you see that quite strongly I think with his reluctance to want to kill Yogo.

JO: But [that scene] kinda splits that whole notion apart.

NICK: Yeah, it’s like he [Seibei] doesn’t want to return to that old life in a way, as well.

NICK: Hmm. He’s totally more of a man in that he doesn’t care about saving face in front of his co-workers…

SCOTT: But underneath all of that is a wonderful love story, that reminded me a little of the Robin Hood films.

NICK: It’s almost like the biggest moment for him to show his courage is when he proposes to [Tomoe], I guess, before going off for the big duel. The touching thing is how he has it all on the line and he has declared that he is going to win the battle and come back, and you are really thinking “come on, [please] marry him!” give him a burst of positivity, and then, you know, she’s already been married off…

JO: Was his [Yogo’s] face green, or was that just makeup to make him look decrepit? It was a little bit scary.

SCOTT: It was a little bit like Apocalypse Now.

JO: Yes, absolutely, that’s what I was thinking of too.

NICK: And Kurosawa films, like Yojimbo when [Mifune] comes out of a barrel after being beaten and looks like a ghost, in the graveyard. And they [the Japanese] have that culture of [dramatic] mask-wearing and everything [i.e. the Noh theatre tradition].

JO: I thought it was really tense that scene actually, quite different from anything that had come before in the film, and I think that’s got a lot to do with the confines in which it was shot. I think whenever you shoot something in a small space like that there’s just so much room for things to go wrong.

NICK: Well that’s the downfall in the end for the bad guy [Yogo] in the house.

SCOTT: The interesting thing is that they are set up as equals in that scene, in terms of their sword fighting ability and also their personal history and their hardship, and yet there’s one moment when they become unequal, when the hero becomes clearly the hero, and that is when the other guy is insulted and that’s when the fighting starts and he [Yogo] inevitably loses.

NICK: Yeah it’s very modern in a way because the film seems to be criticising those people who can’t let go of the past, people stuck performing out-dated routines that perhaps no longer make sense in a changing world. Very apt at the end of the samurai era, as all Seibei wants is peace; is to put down his sword for good and become a farmer and look after his family.

Overall, I am very glad that we all really enjoyed this subtle little samurai film. In closing, I have to add that Yogo was so amazingly crazy: he was snacking on the ashes of his daughter for god’s sake! Wow!