It has been four years since David Michôd’s auspicious debut feature film Animal Kingdom was released, but now he is back with The Rover, which he also wrote and directed. It contains many of the stylistic flourishes that marked him as a director to watch – arresting cinematography, a controlled sense of patience and restraint, and the ability to generate palpable dread. Combined with an unsettling score the film certainly has many engaging moments and exchanges. However, its relatively simple, straight-forward plot prevents it from sustaining suspense throughout, and the film’s futuristic, dystopian setting is not as distinct and developed as it could have been. Nevertheless, the two central performances, along with the assured overall direction, make The Rover a solid addition to Michod’s burgeoning filmography.

It has been ten years since the ‘collapse’, an unexplained catastrophic event that has plunged the world into a resource-scarce, dangerous place. In the glaring heat of the Australian outback, three men crash their car on the side of the road, and steal Eric’s (Guy Pearce) car to continue on their quick getaway. Eric, fuelled by a seething anger, begins a relentless hunt to enact retribution, and eventually is joined by Reynolds (Robert Pattinson), or ‘Rey’, the younger brother of one of the members of the hapless trio.

The film’s major strength is its two central performances, which are impressive. Pearce infuses Eric with a deep-rooted, barely contained resentment, and even though backstory is only briefly mentioned he nevertheless manages to create an intriguing force of a character. Michod’s patient direction and sparse dialogue make Pearce’s exchanges with other characters terse and taut; the scenes seem to teeter on the edge of unpredictability. Pattinson’s performance is also striking. His Rey is a nervous introvert, uncomfortable in his own skin, who mumblers and slurs his words with a thick southern American drawl. Even with the facial twitches, wandering gaze and unsteady gait Pattinson steers clear of coming across as forced or mechanical; instead, his movements seem unaffected. Ultimately, the lingering gaze and close-ups of Michod’s camera enable the pair to find behavioural nuances for their characters. 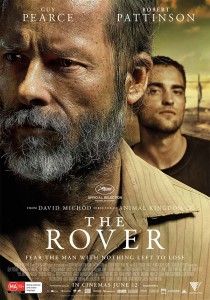 These performances are immersed in a visual and auditory landscape that alternates between relaxed silence and jarring anxiety. At times the heightened, staccato score seems to clash with the barren beauty of the Australian environment, but this juxtaposition also works to create a disquieting mood.  However, plotwise, the film does not sustain the same levels of tension. Compared to the fantastically executed first encounter between Pearce and the trio, the final scenes are deflated and a little anticlimactic. Additionally, whilst the film is set in some nebulous, dystopian future, the imprint of the ‘collapse’ could have been more defined; collectively, the lack of resources and the survival-of-the-fittest mentality are not enough to differentiate the collapse from other potential catastrophes. Nevertheless The Rover is worthwhile for its duet of fine performances and the chance to see a Michod refine his emerging directorial style.

The Rover is in Australian cinemas from 12 June through Roadshow.