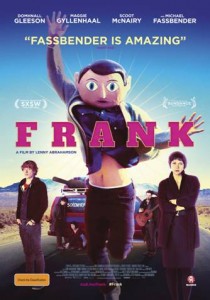 Courtesy of Madman Films, Film Blerg is giving away 5 double passes to see Michael Fassbender as FRANK, in cinemas from June 19.

Film Synopsis: FRANK is an offbeat comedy about Jon (Domhnall Gleeson), a wannabe musician who finds himself out of his depth when he joins an avant-garde pop band led by the enigmatic Frank (Michael Fassbender), a musical genius who hides himself inside a large fake head, and his terrifying bandmate Clara (Maggie Gyllenhaal).