“You can’t become a freedom fighter by just watching”.

Taking at its heart the Israeli/Palestine conflict, Omar focusses on its title character (Adam Bakri), a young Palestinian on the way to becoming a ‘freedom fighter’ with his childhood friends, Amjad (Samer Bisharat) and Tarek (Iyad Hoorani), with whom he plots and executes the assassination of an Israeli guard, while simultaneously courting Tarek’s younger sister, Nadia (Leem Lubany). The tone of the film then takes a harrowing shift in the aftermath of the killing when Omar is arrested and tortured by an Israeli agent (Waleed Zuaiter). Turned spy, Omar must work out a way to get himself out of trouble, while not betraying his friends and also getting the girl. Following a labyrinth of simple but effective twist and turns, the story comes to an abrupt and shocking ending which will be as divisive as it is undeniably effective.

The film asks particularly pointed questions about the nature of the conflict and the difference between the notion of freedom fighters and terrorists. Initially taking a strong pro-Palestine stance that many will consider propaganda, writer/director Hany Abu-Assad delves deeper into the struggle not only between the nations, but within the naivety of the characters fighting each side. He crafts a complex tale that while coming to some strong conclusions, is by no means less thoughtful and considered.

The innocence of the relationship between Omar and Nadia is another high point and a refreshing change from western cinema where physical affection between lovers has become almost entirely meaningless. Unable to kiss or be seen together without Tarek’s family’s permission, every touch and conversation they share becomes particularly heated and all the more effective for it. 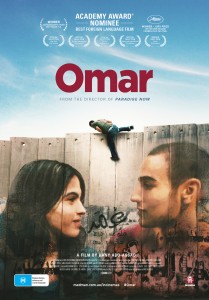 The film offers strong, naturalistic performances from a cast of unknowns. As the title character, Adam Bakri creates a textured and multi-layered portrayal that should bring him on the international stage. As the love interest, Leem Lubany brings an innocence and sweetness to the role which never undermines her highly guarded independence and intelligence. Again, bigger things will come if she so chooses. The more experienced and seasoned actor Waleed Zuaiter is perfectly cast as the embittered, but dedicated, Jewish agent who forms an unlikely bond with Omar, and will hopefully find more roles like this – as oppose to the token Muslim in Sex and the City 2.

Utilising simple, effective storytelling methods, writer/director Hany Abu-Assad has crafted a supremely engaging narrative that is at once emotionally heart wrenching and entirely involving on an intellectual level. Two chases on the streets of Palestine are particularly well staged and shot, and are bound to get your heart racing more than any CGI heavy action blockbuster this year.

There are two types of film masterpieces. The first, are those that break new ground entirely with an audacity of vision that extend the possibilities of film as a medium. Movies like last year’s Life of Pi and Cloud Atlas are prime examples. The second, are those that while not necessarily breaking new ground, are crafted absolutely perfectly within the established parameters of film as we know it. Omar, is such a film. Masterfully made and never less then entirely engaging, it is a masterpiece that will resonate with you long after you’ve finished watching.

Omar is in Australian cinemas from 5 June through Madman.

Written By
Chris Smith
More from Chris Smith
It’s hard to imagine what the landscape of film criticism would be...
Read More