T.C. Johnstone’s documentary charts the journey of the Rwandan cycling team a decade on from the 1994 Hutu-Tutsi conflict. Johnstone introduces us to the team members and their heart-wrenching back stories, all set in the backdrop of a bloody and unnecessary war. Yet the main character is a white guy – an American named Jacques ‘Jock’ Boyer to be precise – whose sob story is portrayed as being on par with the struggles faced by his Rwandan counterparts. The film’s self-glorifying Western mindset is best summed up when the Rwandan team are touring through the United States, and Boyer observes that their comfort in the country highlights how friendly Americans are towards foreigners. Sure, it’s a sincere thought, but one that is completely out of perspective.

Boyer is a world famous cyclist and former prisoner, who travels to Rwanda at the request of cycling friend Tom Ritchey to institute the country’s first national cycling team. There’s no doubt that Boyer is an honourable man and that his story deserves to be told. But the film is never clear about its focus – is it a tribute to Boyer and his redemption, or an inspirational tale about Adrien Niyonshuti, Abraham Ruhumuriza, and the other members of the Rwandan cycling team?

One suspects Johnstone was aiming for something in between, and that decision ultimately lets the film down. From the ‘last week in the Bold and the Beautiful’-esque introduction to the closing scenes, the film is disjointed, tracking multiple storylines and never quite giving any the justice they deserve. 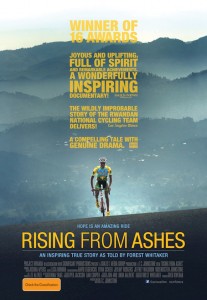 While Rising From Ashes is a flawed film, it nevertheless serves a purpose. From an educational perspective, the film does well to eliminate the prejudices of Western audiences, particularly those who continue to associate the nation of Rwanda with genocide and nothing else. While it concedes that the nation still has a long way to go, it demonstrates that the progress made to date is significant.

Unfortunately these messages are drowned out by Boyer’s ego and Johnstone’s reluctance to give the Rwandan players a louder voice. What results is a film set in Rwanda, about Rwanda, and starring Rwandan people that seemingly says more about America.

Rising From Ashes is in selected Australian cinemas from 19 June through Curious Distribution.