Long debated is the genesis of evil: is one born evil or can one become evil? With Disney’s new film Maleficent the answer is pointedly clear. Further pushing the popular “story behind the story you knew” mood with Oz: The Great and Powerful and Alice in Wonderland, Maleficent takes a figure known to popular culture and turns the audience’s notions on their head.

Born as the strong, powerful and amiable Queen of the Fairies, Maleficent (Angelina Jolie) has an innocent and pure childhood, similar to Mowgli in The Jungle Book, in the moors outside of a magnificent castle. Stumbling across a local boy Stefan (Sharlto Copley), Maleficent falls in love, despite the difference of worlds. As the two age, Stefan falls prey to the lure of the kingdom and quite literally breaks away from Maleficent leaving her wingless.

And this is where it all begins. Maleficent demonstrates the cause and effect chain that leads to the leading heroine’s turn from good to evil. Though evil seems quite the pejorative and misused term. Maleficent is positions as a woman who suffers the xenophobic consequences of her Otherness, a trait handed to many of the Disney princess heroines. Her pain manifests outrage and harm, but has deep, personal consequences. While avenging the life-altering torment she has endured, she harms the innocent baby Aurora with the curse that is familiar to even those that haven’t seen the classic Sleeping Beauty. 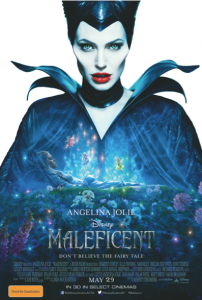 Visually, Maleficent is quite impressive, even if plot-wise the film sometimes falls flat. Director Robert Stromberg (former Art Director of Oz, Alice and Avatar and visual effects designer of tons of recent films) imposes much action and a dark mood through James Newton Howard’s brooding and powerful score, though this mood is interspersed with much light, displaying goodness, a fact we are impressed upon consistently throughout the movie. Jolie gives a surprisingly commanding performance, with many moments of humour, tenderness and, of course, showing great power. Elle Fanning is appropriately inquizitive and innocent as Aurora, with Imelda Staunton, Lesley Manville and Juno Temple providing light-hearted comic relief as the three fairies that take care of Aurora. Janet McTeer also provides warm narration, which appears consistently throughout the film, a rare feat for narration in film.

In a way, Maleficent is a love story between two unlikely characters, and a retelling of a very familiar story. Though the trailers show the film to be quite dark, the film is indeed suitable for school aged children.

Maleficent is in Australian cinemas from 29 May through Disney.

Written By
James Madden
More from James Madden
In an effort to make reference to All the President’s Men, episode...
Read More