The premise of Jonathan Glazer’s film, Under the Skin, doesn’t sound like anything new: an alien comes to earth, taking the image of a beautiful woman who preys on men. Sounds familiar, doesn’t it?

Well, regardless of whatever preconceptions you may have, Michael Faber’s novel of the same name has given Glazer ample inspiration in his screenplay, co-written with Walter Campbell, enough to turn this trope on its head in a brooding exploration of the human condition and the bleak Scottish countryside. In no small way is this success owing to some unique direction from Glazer, while Scarlett Johansson’s presence as the seductive alien is at various times arresting, chilling and even pitiable.

The film kicks off with a mesmerising sequence as the unnamed alien (Johansson) comes into being, practising the phonetic alphabet in preparation for taking human form. Any specific purpose for the journey-to-be is unspoken as another alien, appearing as a male motorcyclist (Jeremy McWilliams), prepares the new arrival for going out into the world. Taking a van to the roads of Edinburgh, she proceeds to pick up men from the roadside. With tussled short brown hair and a disarming lilt, her requests for directions give way to subtle interrogations ultimately aimed at exposing the lonely soles whom she might lure into her sleek otherworldly lair.

At certain moments, you can’t help but wonder whether you’re watching Johansson or her character. After all, Johansson herself drove around Scotland in a camera-filled car, and some of the conversations shown here are of her improvising in character with everyday strangers. Many bystanders obviously have not recognised her in this rather uncharacteristic garb, and these authentic interactions make for slightly uncomfortable viewing. One man who is asked to give directions is almost incomprehensible in his cheered Scottish accent, but there is a moment when the alien’s (or is it Johansson’s?) improvised line of questioning, preceded by an ominous stalking approach, strikes a cord of unease with the subject, a cord which is echoed by composer Mica Levi’s haunting strings soundtrack. 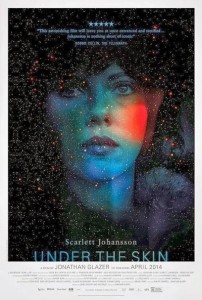 Perhaps what is most intriguing is the way in which Johansson’s character grows into a body she doesn’t entirely understand. She knows at once that her figure has an alluring power on the other sex, although as the film develops and we discover the world through a stranger’s eyes, her role as predator becomes less certain. When we learn the necessity behind her actions, and she gradually becomes more self-aware in lieu of a stream of events – an incident involving a family at the beach, an encounter with a young man isolated by deformity – her development raises a number of issues and as many questions, not all of which are answered by film’s end.

Beautifully captured by cinematographer Daniel Landin, and involving minimal dialogue, this is not so much a story as an experience. The harrowing aforementioned scene on the beach is particularly memorable for just this reason; it could be recounted for you, but you’d need to see it – and hear it – for yourself.

With so little exposition or narrative drive, you may not perceive a clear point, and to some this might be seen as a roadblock; however, for a new interpretation on an old story, this is certainly one out of the box.

Under the Skin will be on limited release in Australian cinemas from May 29 through Roadshow Distribution.

Written By
Angus Tonkin
More from Angus Tonkin
Approach William Shakespeare in isolation from his plays and expect to lace...
Read More