How do you review a film that completely baffles you and yet entertained you in equal measure? Sometimes you just have to accept that what comes out of Terry Gilliam’s head left the realm of sense some time ago.

Gilliam has called his latest film the third piece in a puzzle that started almost 30 years ago with Brazil and continued with 12 Monkeys about a decade later. It only seems fitting that the bizarre dystopian fantasy that finishes it off should go by yet another title that gives very little away – The Zero Theorem.

Qohen Leth (Christopher Waltz) is a bit of a sad case. He waits for a call to explain to him the meaning of life, and with none forthcoming, his days are spent in a state of crippling angst. He recoils from human contact, and in this sense, he is the perfect man to solve a complex problem for the figure known only as ‘Management’ (Matt Damon).

The problem is ‘The Zero Theorem’, a formula that is purported to prove that 100 per cent equals zero – or in other words, that the universe is fated to collapse into a blackhole, rendering his and everyone else’s lives meaningless. He knows he’s getting close, but his work is constantly interrupted by people who insist on butting in: one is a seductress, Bainsley (Mélanie Thierry), who hopes to coax Qohen from his hermitic lifestyle (if indeed that is a word); the other is Management’s sheltered teenage son Bob (Lucas Hedges), who is likewise a computer genius and calls everyone else Bob as well.

From a screenplay by Pat Rushin, there are rarely moments in this where interest is lost. It is certainly worth noting, though, that is not a comedy. There are certainly comedic elements (such as a rapping Tilda Swinton among other things), but you get the feeling that the overriding themes are more greatly aimed at unsettling the viewer. 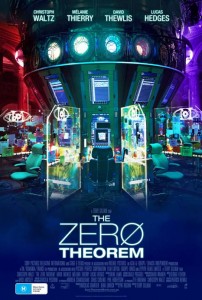 It’s certainly no secret that Gilliam views the role of technology as a flawed one. His eccentric set designs are a stark example of this – distinctively futuristic but always slightly daggy and imperfect – and, in this sense, the limited budget seems to work for the film’s benefit in a peculiar way.

Whether it is his intention or not, this seems to imply that no matter how far we claim to advance the human condition through technology, there will always be impracticalities. And a machine will certainly never be able to tell us how best to live our lives. The main characters here – Qohen, Bainsley and Bob – are all in a way distanced from a fulfilling life because of technology.

However, whether any satisfying resolution to their issues is established is up for debate. Anyone who can follow this narrative completely from beginning to end certainly deserves a medal. All that was left was a strange feeling of having enjoyed something that couldn’t be explained.

The Zero Theorem will be on theatrical release from May 15 through Sony Pictures.