Richard Ayoade is best known for his absurdist character humour in television shows like The IT Crowd and The Mighty Boosh. However his second effort in the foray of filmmaking, The Double, is about as far removed from Maurice Moss or Saboo as you can get. While still technically a dark comedy, most audiences won’t find themselves in the right mood to laugh, and those that do will mostly derive their amused grunts from schadenfreude, irony, or protagonist Simon James’ (Jesse Eisenberg) downward spiral into madness.

Based on Fyodor Dostoevsky’s novella of the same name, The Double is the story of a hard-working yet easily-forgettable employee, whose new colleague is his doppelganger. Both characters are played by the versatile Eisenberg (The Social Network), who excels in the dual roles of Simon James/James Simon. Despite playing two identical-looking characters, there’s never any doubt over who is who. The introverted and devastatingly unlucky Simon is feeble and Michael Cera-like in comparison to James, who is confident, arrogant, and animated. It should be weird seeing Eisenberg be both brash and timid in the same frame, but at times it’s actually possible to forget they’re played by the same actor.

Depending on your reading of the film, James is either the best version of Simon, or his greatest enemy. James usurps Simon at work – both professionally and socially – starts dating the woman of Simon’s dreams, and has the assertiveness to always get what he wants. The interaction between these two similar-yet-so-very-different characters is not dissimilar to the relationship between the protagonist in Fight Club and Tyler Durden. 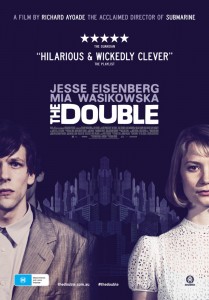 Despite the dull tones and the frustrating monotony of Simon’s work – the nature of which is never truly explained – the film remains engaging. Music writer Andrew Hewitt and the sound team deserve credit here, for the way that the background noise – or lack thereof – creates suspense, and gives the film a noir-like feel. Little things, like replacing the sound of flowing water with the heavy drone of aviation, prevent the audience from ever getting too comfortable.

The Double is a deep film, but one that ultimately leaves many questions unanswered. The film explores weighty themes such as loneliness, stalking, and suicide, while opening up cans of worms about identity, doppelgagers, and the definition of existence. But to the layperson, it’s unclear how to connect the dots and what conclusions to draw. There’s no doubt that audiences will prescribe a range of theories to The Double, and that internet forums will contain obsessive discussion of the film’s meaning.

The Double is in Australian cinemas from 8 May through Madman.