‘I look back on my life and its 95% running around trying to raise money to make movies and 5% actually making them. It’s no way to live.’

So said that cinematic legend, Orson Welles – a quote that sets the scene for this documentary, Seduced and Abandoned, from James Toback and Alec Baldwin. Well, clearly it is a way to live, as the cigars, red carpets, yachts and Riviera lifestyle can confirm, but if we look past this decadence, these two veterans can reveal some disconcerting truths about life, and death, in the industry.

Taking long-time thespian Baldwin along on a journey through the many facets of the modern-day Cannes Film Festival, Toback proposes two goals: the first is to find funding for an upcoming project; the second is a more general exploration of the evolution, or devolution (depending on your view), of cinema.

Having written and directed films for 40 years, Toback seems a fitting host, and he demonstrates the transition from the 70s through to now by balancing views of the old world (from legends like Bernardo Bertolucci, Roman Polanski and Martin Scorsese) with the new (Ryan Gosling, Berenice Bejo and Neve Campbell). What we see is an unsettling, yet unsurprising, rift between sincere artistic expression and the profit-driven world of movie financing. 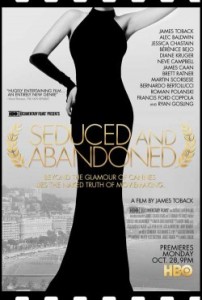 The documentary’s results are never less than engaging and, at many points, amusing. While the interviews with directors and stars will no doubt interest many, the most interesting insights of this film come from the act of pitching to producers and prospective financiers – the often unseen gatekeepers to the bank vault for every budding filmmaker. Talent is put to one side and is replaced by the box office, making for some ruthlessly blunt assessments of the monetised state of cinema.

Yet, for all its successes, the film’s inability to stick to a single focus is unavoidably frustrating. The action haphazardly switches between the pair’s efforts to find funding and their endeavour to document the changing face of cinema, with narrative cohesion clearly lacking as a result.

This is a film about a medium that has become more industry than artform; about the inherent nostalgia that comes with dissatisfaction towards the present; and about what Ryan Gosling calls the mad Don Quixote-esque journey that everyone involved chooses to go through – one which sees participants, in Baldwin’s words, ‘seduced and abandoned’ time and time again.

Seduced and Abandoned is in Australian cinemas from 8 May through Transmission Films.