Vampire films have abounded in the last couple of years, but even so, Jim Jarmusch has managed to craft his own unique addition to the genre with Only Lovers Left Alive, which he wrote and directed. Imbued with a dark, seductive atmosphere, it deviates from other such films through its mood of weary contemplation and distant nonchalance. Easy on plot but imbued with a poetic style and memorable imagery, the film provides a more mellow take on vampires and their lives, embodied with deft ease by the film’s central duet of performances and Jarmusch’s patient direction.

Adam (Tom Hiddleston) and Eve (Tilda Swinton) are vampires and lovers, but are living on opposite sides of the world; Adam leads a reclusive life in Detroit working on his new music (a brand of melancholic rock), and Eve, living in Tangier, is accompanied by their friend Marlowe (John Hurt). At Adam’s request, Eve makes the trip to join him, where they cruise the abandoned streets of desolate Detroit and chill in Adam’s spacious apartment. Their quiet lives, however, are interrupted by the arrival of Eve’s ‘sister’ Ava (Mia Wasikowska), whose relative youth and recklessness threatens to compromise them all. 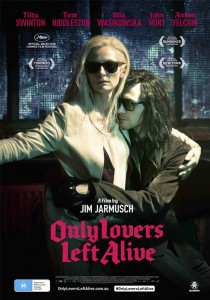 Admittedly, not much happens plot-wise, and the pacing is slow. As opposed to portraying vampires as some combination of vicious and seductive, Jarmusch instead focuses on the languid moments that dominate their lives after millennia of camouflage. This mood is captured brilliantly by the film’s performances. Hiddleston is weary, even a little exasperated, and he carries himself with a chilly aloofness. Swinton is a little more curious, a little less jaded, and exudes an effortless cool with her bleached hair and soft voice, even when simply walking through the empty streets of Tangier in the middle of the night. Their existence is not characterized by a constant effort to evade being caught but instead by a practiced immersion. Even Wasikowska, despite bringing more exuberance to the second-half of the film, manages to temper her sense of restlessness with hints of the ennui to come.

Against the dreary backdrop of an abandoned Detroit, Jarmusch manages to create a darkly hypnotic mood, through lingering shots and interesting camera angles. The cinematography is stylish throughout, and there are countless images infused with a lyrically poetic quality, such as the scenes of Hiddleston and Swinton lying, limbs entangled, on their bed. The film also has a wry sense of humour, courtesy of its numerous literary references.

Only Lovers Left Alive may not be the most exciting vampire film, but it is certainly distinct in its style and perspective, and ultimately a welcome addition to the genre.

Only Lovers Left Alive is in Australian cinemas from 17 April through Madman Entertainment.