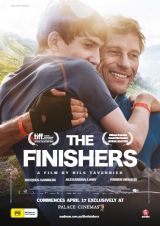 Courtesy of Madman Films, Film Blerg is giving away 10 double passes to see THE FINISHERS, in cinemas from April 17.


Film Synopsis: Julien is 17, has a great sense of humour, bags of charm, and is wheelchair-bound due to cerebral palsy. Despite their love for him, his family is gradually falling apart under the strain of dealing with his disability. In a bid to bond with his father, Julien challenges him to participate with him in the Ironman race in Nice (French Riviera), a triathlon in which his father has previously competed.

This trial is already exceptional, but it becomes almost impossible if one has to help a disabled youth throughout the course. Beyond the sporting exploit, this is the story of one family’s exemplary combat, and a moving portrait of the love between a father and his son.