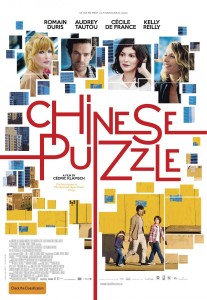 Courtesy of Transmission Films, Film Blerg is giving away 5 double passes to see CHINESE PUZZLE, in cinemas from April 17.


Film Synopsis: When the mother of Xavier’s two children relocates to New York with the kids, Xavier can’t imagine living away from children, so he follows them to New York. Life doesn’t seem to get any simpler in New York, though, and Xavier faces a real Chinese puzzle.