When The Muppets were a big TV hit in the 70s and 80s, one presumes that loyal audiences could skip the odd episode here and there without really missing anything. Sure, they might bypass a nice song or two or a few decent gags, but rarely would they be denied a critical plot point or an unmissable piece of action.

You could attribute much the same feeling to Muppets Most Wanted, the eighth Muppets film and the sequel to their highly successful 2011 comeback The Muppets. It’s very much an unspectacular but solid three-stars film, the kind of film a fifth grader will proclaim is their new favourite during Monday morning show-and-tell, but will forget about by Friday.

Muppets Most Wanted is laced in the self-referential and ironic humour that has kept the franchise going strong for decades. In the typically cheesy opening number, the Muppets stars admit that “sequels are never quite as good”. In accordance with their prophecy, Muppets Most Wanted never reaches the heights of their most recent effort. But it’s still a fun ride. 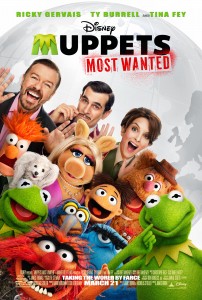 The star of the show this time is Constantine, a criminal mastermind who is one beauty spot and a thick Russian accent away from being identical to Kermit. Along with his second-in-charge Dominic Badguy (Ricky Gervais), Constantine infiltrates The Muppets cast, takes them on a world tour, and uses their performances as an excuse to rob famous museums. The pair’s intention to steal the Crown Jewels is never really explained, but nor does it matter; the premise gives the Muppets an excuse to travel around Europe, and that’s enough to appease the audience.

As with any Muppet feature, the film is littered with celebrity cameos. Most of these are short side-gags included merely to excite online celebrity forums, but they nevertheless remind the audience not to take the film too serious. Usher plays an usher, Christopher Waltz does the waltz, and Celine Dion – who the Muppets cast insult early in the film – chimes in for a tacky solo. Modern Family’s Ty Burrell, 30 Rock’s Tina Fey, and Flight of the Conchords’ Jemaine Clement all earn themselves higher places on the credits, but at the end of the day their appearances come secondary to the likes of Kermit, Miss Piggy, Fozzie Bear, Sam Eagle, Animal, and co.

Music is unsurprisingly another key feature of the film, with Clement’s partner in crime Bret McKenzie returning to the composer’s chair. It’s unlikely that McKenzie will trouble the Oscar judges again this around, but fun numbers like Constantine’s sleazy “I’ll Get You What You Want” and Miss Piggy’s “Something So Right” help move the story forward.

With all things considered, Muppets Most Wanted will not take its place in The Muppets canon. It’s an inoffensive offering that loyal Muppets lovers won’t decry, but it’s essentially just another Muppets movie. You can’t go wrong in seeing it, but you can’t go wrong in missing it either.

Muppets Most Wanted is in Australian cinemas from 10 April through Disney.