Father Julian (Ricardo Darin) and Father Nicolas (Jeremie Renier) are working in the poverty-stricken and incredibly volatile slum, Villa Virgin, in Buenos Aires. Villa Virgin is rife with crime and violence and the disparity between the rich and the poor is extreme. The ‘white elephant’ at the centre of the film is the urban wasteland on which an enormous hospital sits unfinished.

While helping with its construction, the Fathers are simultaneously trying to keep church leaders happy while coming into opposition with corrupt politicians. This isn’t easy, especially when they’re also keeping the peace between rival drug gangs, the two men expressing differing opinions on how to deal with the groups. They work side by side with the kind and switched on social worker Luciana (Martina Gusman), a woman who proves to be irresistible to Father Nicolas.

White Elephant is essentially a character study of two very different men with a backdrop of extreme poverty and an absence of social justice. Father Julian is a dedicated man who works himself into the ground, despite ailing health. Intense feelings of guilt overpower Father Nicolas after he failed to hold his own against a paramilitary group who massacred villagers while he was working on a project in the jungle. Their courage can never be questioned, especially the former, a man suffering from a presumably terminal illness, trying to make as much of an impact as he can before his time runs out. 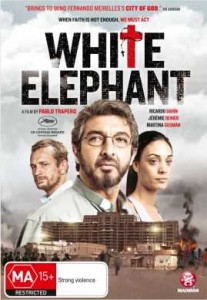 The visuals are a little confusing, in a somewhat conflicting move it appears that director Pablo Trapero wants to present the destitute surroundings of Buenos Aires with a slick, clean and polished look. Considering its subject matter, the film is perhaps too pristine. Are the visuals meant to push us harder for the cause or are they encouraging an overall sense of futility?

This film isn’t necessarily about a love for God or religion, but the two central characters are used to promote their own kind of purity in the face of violence and injustice. White Elephant begins with a bang, but slowly fizzles out. There is lots of passion despite an absence of hope, but ultimately the lack of focus (as well as a surge of melodrama), causes the punch that its climax should deliver to weaken.

White Elephant is out on DVD through Madman Entertainment.