Avengers fans rejoice, there is a new instalment to the successful Marvel Studios franchise and it packs quite a punch. Super soldier Steve Rogers (Chris Evans), better known to his buds as Captain America is struggling with the modern world after being frozen in an ice cube since World War II. In The Avengers, being the good soldier that he was, he got on with the job at hand without too many “I’m technically 94 and don’t fit in here” kind of struggles, but now we get to peer behind the mask and see what our favourite icicle is feeling since reanimation.

The serum is still in full effect and he is as fast and strong as ever, physically, mentally he is struggling to keep up with the motives of the government organisation for whom he works, S.H.I.E.L.D. In the good ol’ days things were black and white; America good, Nazi’s bad, 70 years on however the lines are blurred and The Captain doesn’t quite know where he stand. Which makes him a threat to the natural order, or so some believe.

Black Widow (Scarlett Johansson) is also fleshed out a little more in this instalment, though as always, her story is a side note to the male leads the films are all named after and one of Marvel’s most interesting and iconic characters is left begging. Comic book fans will lament the lack of actual Winter Soldier (Sebastian Stan) action going on, particularly the opportunity for major chemistry between the gun-toting psychopath and everyone’s favourite Russian. 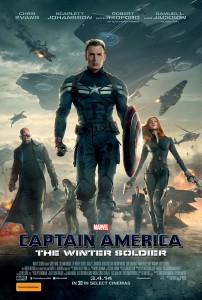 The action scenes are a little disorientingly up close and personal (particularly when viewed in 3D) at the beginning but become much less close-up handy cam and more giant explosion viewed from afar. Thrillingly choreographed with a healthy dose of throaty, impressed, ouch laughing (you know when someone totes badass does some huge fly kick and smacks down some foe in a cool but incredibly violent kind of way and it’s completely awesome? The correct response is not laughter so you try to disguise it with a sort of “ooh, that’s gotta hurt”. No shortage of those.)

The Russo Brothers have done an incredible job with a strong ensemble cast that also includes Falcon (Anthony Mackie), Nick Fury (Samuel L. Jackson) and S.H.I.E.L.D. top dog Alexander Pierce (Robert Redford), blending full blown comic book action with emotional nuance and character development. There are also plenty of laughs for followers of the franchise and comic book nuts alike (keep an eye out for Ed Brubacker as the pivotal Scientist #2, as well as the regular, and unworthy in the case of Captain America, cameo by Marvel legend Stan Lee).

Definitely the best in the franchise for a long time, which is saying something because I loved Thor 2.

Captain America: The Winter Soldier is in Australian cinemas from 3 April through Disney.

Written By
Kendal Coombs
More from Kendal Coombs
In 2012 entertainment sites lit up with the news that several Los...
Read More