When I told a good friend I was going to see Noah, he joked that I absolutely needed to start my review with two lines:

Though I can’t really agree with the specifics of his prophesising, I will borrow his numerical approach.

So first up I have to admit that: (1) I am not particularly well-educated when it comes to religion, and Christianity in particular, and (2) I had low expectations of this film going into the screening, mainly because of point 1.

As for the first point, well heck I know jack-all about maths and still enjoyed director Darren Aronofsky’s first film Pi, so I wasn’t going to let not having a strong grasp of all-things-biblical hold me back. I figure a great majority of people who go to see Noah will be in my irreligious camp anyhow, and like many spheres of Western society mainstream cinema is usually fairly secular. It is therefore interesting that this film has been made at this time. Biblical epics are an old Hollywood genre, going back to the silent days of Cecil B. DeMille and co, and though they are rarer today, in a business-sense I suppose there is a large market for this type of story. Apparently several other big-budget biblical epics (including Ridley Scott’s Exodus) are being produced at the moment.

It is also quite interesting that the (admittedly eclectic) Aronofsky has tackled this material as his next film after the excellent Black Swan. My take on the whole Noah project is that he and fellow screenwriter Ari Handel have approached the story from a decidedly humanistic* perspective, and that this is their “in” to the material. Noah is therefore not preachy, which is a godsend. 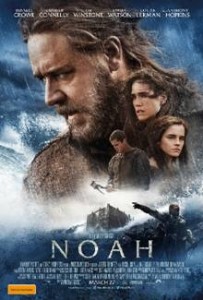 When Noah (Russell Crowe) envisions the end of the world in a dream, he prepares his family for the coming flood that will wipe out all life on Earth. He believes that God is angry with man for their essentially ‘sinful’ ways, and that “The Creator” is going to return the world to a state of nothingness. Noah builds an ark – a massive water-going vessel which pairs of animals somehow instinctively fill in order to survive the coming floods. Noah believes that he has been commanded to lead the regeneration of Earth after the deluge ‘cleanses’ the Earth of sinful humanity. Noah is assisted in his efforts by his wife Naameh (Jennifer Connelly), sons Ham (Logan Lerman), Shem (Douglas Booth), and Japheth (Leo McHugh Carroll) and a girl, Ila, (Emma Watson) who was saved by Noah and his family from a band of savages as a child. The savages are led by Tubul-cain (Ray Winstone), a descendent of Cain, while Noah is descended from Abel. Whereas Noah claims to be on a mission from God and that only he and his family are permitted to live; Tubul-cain believes that man controls his own destiny, and that he should be free to survive the apocalypse.

The second half of the film, when the ark is at sea after the flood, takes an interesting turn narratively, and I appreciated the greater moral complexity that comes into the story. Noah deals with various feelings of guilt and then an almost-mad religious resolve to do what he thinks is God’s will, no matter the costs to his family or himself. The scenes where survivors of the flood scream for help and are ignored by the survivors on the ark are also fairly powerful. Noah’s resolve not to assist his fellow man is based on the depraved acts he witnessed the savages perform in order to survive earlier in the film.

In terms of performances, usually in Russell Crowe films I start by thinking, “gee I hate Russell Crowe”, but at a certain point I’m generally sucked into the story and his performance, and realise once again what a good actor he is. In Noah, however, the trajectory works in a completely opposite fashion – you like him initially, and eventually that feeling dissipates along with the voyage of the ark itself. Which is a good sign you are buying the performance, I suppose. Connelly and Watson deal ably with some clunky lines and unflattering costumes, while Anthony Hopkins is really good as Noah’s grandfather Methuselah, and serves as welcome comic relief.

As for the direction, Aronofsky’s trademark visual inventiveness is apparent, though perhaps with less sustained dynamism compared to previous films. There is the rapid-fire cutting of dream montages reminiscent of much of Pi or the drug-taking of Requiem for a Dream, though this is only used sparingly. There are some fantastic time-lapse or stop-motion-like sequences of the earth developing by the will of God. The best of these follows the flight of two seagulls across vast distances making their way to Noah’s ark. Another great visual was the shot of the silhouette of Cain and Abel fighting which merges into the outline of various soldiers from different time periods using the weapons of the day to kill one another. This suggests that man is self-destructive, and is consistent with the overall humanistic message of the film.

It has been written by much wiser souls than me that the cinema should appeal to the heart as well as the head. Film should affect you intellectually as well as emotionally, to have a full impact. Most of the moments I was supposed to feel something in Noah I would say that I didn’t particularly, and I think that it is because I was thinking too much – about why a biblical film was made on this scale today, about the human need to believe in something “else” to make sense of our daily existence, about whether or not I thought the film was as bad as I had been expecting. In short, it wasn’t, but it’s not like I walked away feeling like I had learnt or felt anything really.

*By ‘humanistic’ I mean the film has a great respect for mankind divorced from any worship of a deity.

Noah is in Australian cinemas from 27 March through Paramount Pictures.