As the title suggests, Aim High in Creation is a highly ambitious feature. In just 96 minutes, the Australian-made documentary tries to be a bit of everything: an exposé on coal seam gas mining, an insight into the weird world of North Korea, and a behind-the-scenes short-film featurette.

The link between these three things might not seem apparent on paper. But local filmmaker Anna Broinowski does a commendable job at piecing these disparate parts together into a rewarding piece of protest art.

Aim High in Creation follows the seemingly omnipresent Broinowski – the film’s director, writer, narrator, and protagonist – on a unusual journey. Having gained permission to visit North Korea’s film industry, Broinowski is able to learn about the art of propaganda filmmaking from the communist state’s best directors and actors. With those techniques up her sleeve, she returns to Australia to create an anti-coal seam gas film. 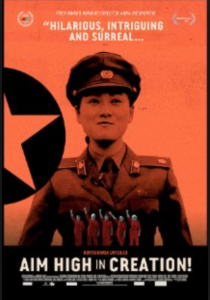 It’s an idea that’s as brave as it is ingenious. And the results are mixed.

The unique access Broinowski gives the audience into North Korea is worth the price of admission. Few Australian filmmakers – let along non-North Korean filmmakers – have succeeded in documenting this enigmatic, yet immensely brutal, nation. In that regard, Broinowski must be applauded for the way she communicates with the surprisingly down-to-earth North Korean people, and her ability to present a balanced report on their strange life circumstances.

Broinowski deserves just as much credit for her portrayal of regional Australian farmers affected by coal seam gas. In a manner very similar to the 2010 Oscar-nominated documentary Gasland, Aim High in Creation documents the intense health risks of this industry activity, leaving its audience with no choice but to feel hostile towards fracking.

Tying these two heavy themes together is the play-within-a-play, per se. This is the most constant narrative of the film – a troupe of actors embracing Broinowski’s propaganda-inspired directions in order to sell a message. Their progression from unconvinced players to loyal comrades is in itself an enjoyable subplot.

As one might expect, the film’s biggest flaw is its attempt to do justice to these three dimensions in such a limited space of time. While the story’s progress is well sign-posted by clear visual and auditory explanations – allowing anybody with a basic political knowledge to follow Broinowski every step of the way – structure is at times an issue. The action often jumps from North Korea across to Sydney, and back again to North Korea, stripping the film of all sense of chronology.

Furthermore, it’s easy to feel unsatisfied by the way Broinowski skims over issues. So many intriguing facets of North Korea are treated with nothing more than a rhetorical questions, while the fundamental problems with coal seam gas are never sufficiently explained to a politics novice.

With all things considered, Broinowski should be applauded for her ability to identify connections between North Korean life and the coal-seam gas issue. The synchronisation isn’t perfect – and so it shouldn’t be – but audiences can nevertheless leave the cinema feeling empathetic towards North Koreans, and apathetic towards their government.

It’s only afterwards that you realise that this is exactly what Broinowski wants. In a somewhat meta twist, you realise that Broinowski’s propaganda techniques concerning coal seam gas have not just worked on her local Sydneysiders, but on us as well. We won’t necessarily leave the cinema convicted by Broinowski’s political analysis or protest techniques. But we do want her film to work. And for the most part, it d0es.

Aim High in Creation is in selected Australian cinemas from 27 March through Unicorn Films.