I do have a little of sympathy for Paul W. S. Anderson, the director of Pompeii. When your source material is a mountain chundering fire and ash onto a helpless Roman town, your options for engaging the masses are rather limited. In the end, the redeeming features will inevitably come from either a. the special effects, or b. an engaging cast. Where those memos went in this film’s production is anyone’s guess.

This story actually starts in Brittania where a young Celt, Milo, witnesses the wrath of Roman commander Corvus (Kiefer Sutherland). With his horseman tribe massacred by the invading forces, Milo (Kit Harrington) escapes death but survives to bitterly endure a childhood in slavery before becoming a gladiator.

Known as a fierce and agile warrior in the ring, he is taken to Pompeii, where he is to battle in the town’s amphitheatre. There he becomes entwined with noble girl Cassia (Emily Browning) and proves his mettle by mercifully breaks a wounded horse’s neck (it’s much more romantic than it sounds). Unfortunately for both of them, Corvus, now a senator, has followed Cassia her from Rome with the not-so-subtle goal of taking her hand in marriage, and if not in marriage, then presumably the hand in general. And, of course, the mountain is about to go geothermal on all their arses. 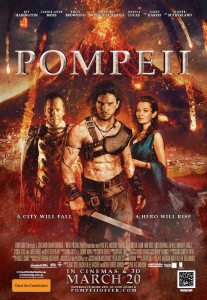 Will Milo belie his status and rescue Cassia from the clutches of evil?

Well, I’d like to say I cared but that would pushing the envelope somewhat. One suspects the screenplay should shoulder most of the blame. Patched together by three writers, Janet Scott Batchler, Lee Batchler and Michael Robert Johnson, this doesn’t seem like something any one person would write naturally. You can see them around a table brainstorming, throwing up stuff like “Oh and then he like kills it! And she’s like, ‘Aww man, I never knew slaves could be sensitive and stuff!’ and then he’s thinking ‘Woah, she’s really hot, and she likes horses, just like me!’” I’m just speculating here. But ultimately, the plot takes every clichéd turn possible. That is, apart from a mildly impressive (albeit exaggerated) tsunami, which appears to take up most of the film’s CGI budget.

Sutherland doesn’t help; his impression of the customary cinematic British Roman accent is unconvincing to say the least, particularly as he visibly strains his face to hold back his more instinctive American growl. Browning plays a compassionate swooner/slave sympathiser, who falls head over heels for a man who hardly speaks. And Kit Harrington doesn’t do much more than ride on the tails of his Game of Thrones fame, bravely defying the crumbling landscape in his best Jon Snow impression.

It is not impossible to enjoy this; there are plenty of laughs to be had. Just don’t expect excitement.

Pompeii will be in Australian cinemas from March 6 through Icon Films.

Written By
Angus Tonkin
More from Angus Tonkin
Are people not as friendly as they were? Are they losing sight...
Read More