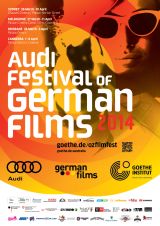 Courtesy of Audi German Film Festival, Film Blerg is giving away 10 double passes to use during this year’s festival, kicking off this March.

Film Synopsis: Audaciously ambitious in its scope, the 2014 Festival will take place over two weeks in six luxurious Palace cinema locations across Sydney, Melbourne, Brisbane and Canberra. Proudly presented by the Goethe-Institut in association with German Films, screening partner Palace Cinemas, and the support of Audi Australia.