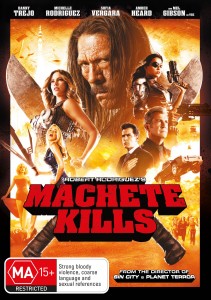 Courtesy of Icon Films, Film Blerg is giving away 3 DVDs of MACHETE KILLS, available to own from March 12.


Film Synopsis: Trained to kill, left for dead, Machete is back and this time he’s on the right side of the law. Recruited by the U.S. government, Machete must battle his way through Mexico to take down an arms dealer planning to launch a weapon into space. The highly anticipated sequel to the cult-sensation MACHETE reunites star Danny Trejo (MACHETE, GRINDHOUSE) and director Robert Rodriguez (MACHETE, SIN CITY).  With gleefully gory comic book action and outrageously over-the-top characters, MACHETE KILLS is bigger, bolder and more badass than ever.

Written By
Film Blerg
More from Film Blerg
"Daniel Craig 2007", SPakhrin, CC BY 2.0 It was with much excitement...
Read More